Detective Dee And The Mystery Of The Phantom Flame (2010) 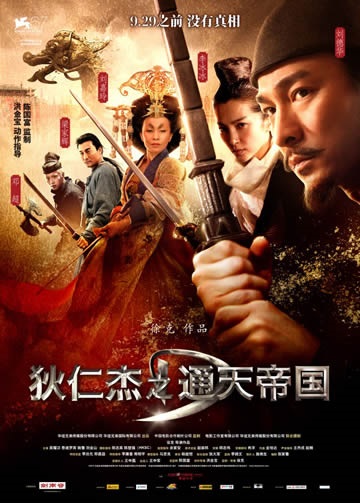 Tsui Hark returns, at last, to the wu xia genre that he reinvented and reinvigorated in the 80's and 90's, with a tale in the vein of the Chor Yuen interpretations of Gu Long's novels (I don't think there's any actual Gu Long connection to this story?). Andy Lau plays the titular detective, who is called in to investigate some mysterious autocombustions in the court of China's first & only empress. The trail leads to conspiracy of the highest order.

Tsui Hark has always been ambitious, never one to rest on his laurels - which is sometimes frustrating given what solid laurels he has to rest on, especially since his post-1995 films have been largely mediocre, many of them thwarted by excessive ambition at the expense of the basics of storytelling. Detective Dee is quite ambitious, but manages to keep its eye on the fundamentals - character, plot, etc. There is heavy use of CGI to create the world, which actually suggests that he was working with a relatively low budget - cheaper to use CGI sets than build them these days. Occasionally the CGI is intrusive, but mostly it's pretty good, though when they use honest solid reality it's invariably an improvement... but some of the sets could never have been realised that way.

There's quite a bit of action, choreographed by Sammo Hung with an emphasis on the wirework - people rarely just walk anywhere, it's mostly leaping and flying - often quite subtly. There's some really cool action sequences with bits of the scenery being turned into weapons, reminiscent of the early 90's style of wirefu more than anything - not especially Sammo's forte, but he does a good job here. Have to wonder what Ching Siu-Tung would have come up with though.

Tsui Hark does have a tendency to cram too much story into his films, often making them hard to follow - DD&TMOTPF is certainly busy, but doesn't get too confusing - it moves along briskly enough to keep you from wondering/worrying whether it all really makes sense, but frankly it's not that important whether it does or not (I think it does though). It's all about the spectacle, and it delivers this far more satisfyingly than anything Tsui has produced in a long time. It's good to see him, finally, back on form. Here's hoping he gets a bigger budget for the next project, and then uses it wisely.

Oh, forgot to note - Andy Lau is great as the titular detective, wouldn't mind seeing him in the role again :)