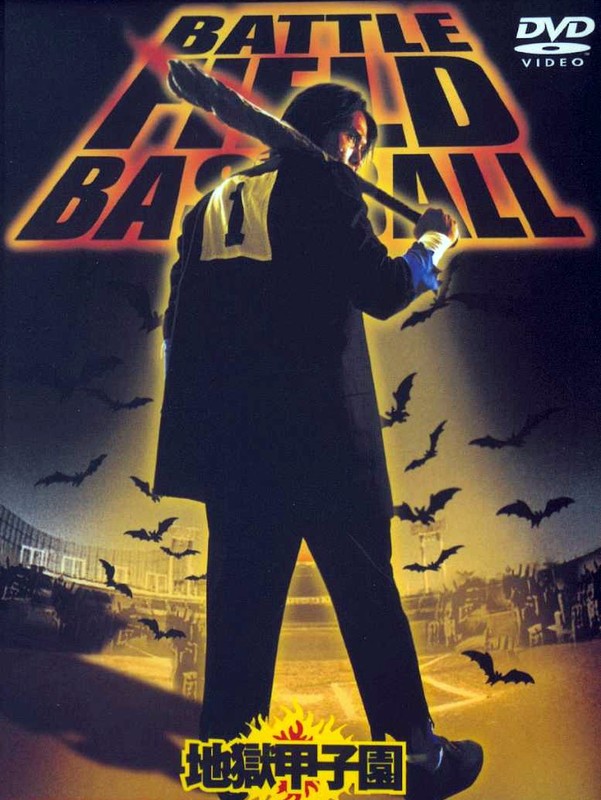 From the star and assistant director of personal favourite Versus comes what may best be described as Shaolin Soccer through the eyes of the Takashi Miike that made HAPPINESS OF THE KATAKURIS. i.e. one of the strangest, silliest and most ridiculous films the world has ever seen.

Tak Sakaguchi plays "Jubei Baseball", a student with extraodinary baseball talent that has sworn off the sport because of... something that happened earlier. He moves to a new school where the principal has but one dream, baseball victory... which he believes he is about to achieve until he discovers his opponents are a team of zombies renowned for not leaving their opponents alive at the end of a game. Can Jubei be persuaded to join the team and help them achieve victory?

Battlefield Baseball is based on a manga, and it shows - the styling of the film is extremely comic-book like, coupled with bizarre soap opera styled melodrama. Unfortunately, the film suffers from an extremely low budget that robs it of most of the coolness that it could have had - and it shows that Ryuhei Kitamura was the real talent behind making VERSUS go so far beyond its budget, not his AD. The acting in the film is outright appalling, but this was at least partially deliberate - the extreme overacting and mugging is almost appropriate to the absurdity of the whole film, but isn't carried off with the kind of class or style that could have made it work better.

BB is undoubtedly a fun film, with some of the strangest lines and events you will see - but it's ultimately too trashy to get the "cult classic" label, but it is an interesting curio, and Yudai Yamaguchi is definitely tagged for further observation.