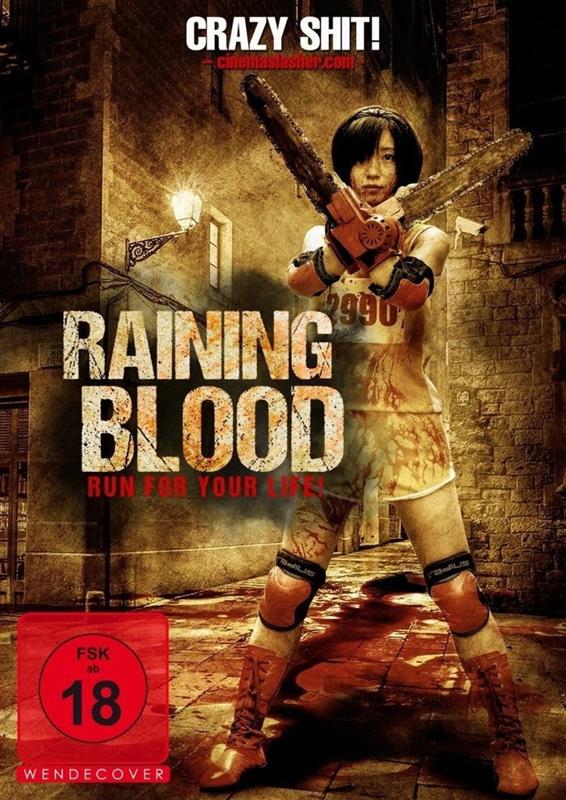 Misanthropic loner Naoto (Yuki Yamada) receives a package and a phone call one day. Inside the package is a copy of a novel by Yusuke Yamada called LIVE, and the phone call is from the sender of the package informing him that he is holding Naoto's mother hostage and will kill her unless Naoto does what he asks.

It turns out the caller is a huge fan of the Yamada novel, and since Naoto happens to have the same name as the protaganist he has decided to involve him in a live action recreation of it. Naoto discovers that a dozen or so other people have been conscripted into the plan, and that they must compete in a Hunger Games style "Triathlon Of Death" if they ever want to see their loved ones again.

Watching Meatball Machine: Kodoku reminded be that I hadn't seen a Noboru Iguchi film in years, so I went online to see what I'd missed. One of the only Iguchi films to get a Western release in recent years appears to be the 2014 film RAIVU... or LIVE ... or RAINING BLOOD in Germany for some reason (why Germany gave it a different name in English mystifies me). The German bluray seems to be the only release, and it only has German subtitles, but I found some English subs on the net so I decided to pick up the disc.

I don't know what went wrong here but RAIVU falls well below the standards I expect from a Noboru Iguchi film. Maybe audiences and investors were just exhausted from the wave of films Iguchi kick started with The Machine Girl and he couldn't get funding... but it's not like Zombie Ass: Toilet Of The Dead was a big budget production and that was far, far more entertaining than this film. Given the relatively large cast involved it can't even have been particularly cheap, so I don't really know why it feels so amateurish.

The storyline is awful - I suppose using the novel as an in-film device to drive the plot is quite clever, but the result is just a nonsensical copy of the HUNGER GAMES formula (I won't give it the dignity of a Battle Royale comparison). Taking a cliched plot and subverting it is of course what Noboru Iguchi does... except here, where he apparently forgot.

But at least it's a good excuse for some gore and "crazy shit" (to quote the bluray cover) ... right? Wrong :-(

This is where I really can't understand what happened. The special effects are just awful, the gore completely amateurish... I quickly came to the conclusion that for some reason regular collaborator Yoshihiro Nishimura hadn't been involved with this film, but if IMDB is to be believed he was the "Special Effects Supervisor". I can't believe he would put his name to this, it is so far short of his usual standard.

Whilst RAIVU looks like typical Iguchi fair on the surface, it fails to deliver any of the ingredients an Iguchi film is supposed to contain. It's tired, pedestrian plot takes itself entirely too seriously, the relationship that develops between the characters makes no sense whatsoever, and when the body count starts ticking up the usual imagination and inventiveness fails to materialise and the amateurish realisation delivers none of the giddy thrills that we have come to expect in this sort of film.

Deeply disappointing, and it's not surprising Iguchi's films haven't been getting international releases if this is what they've been like.