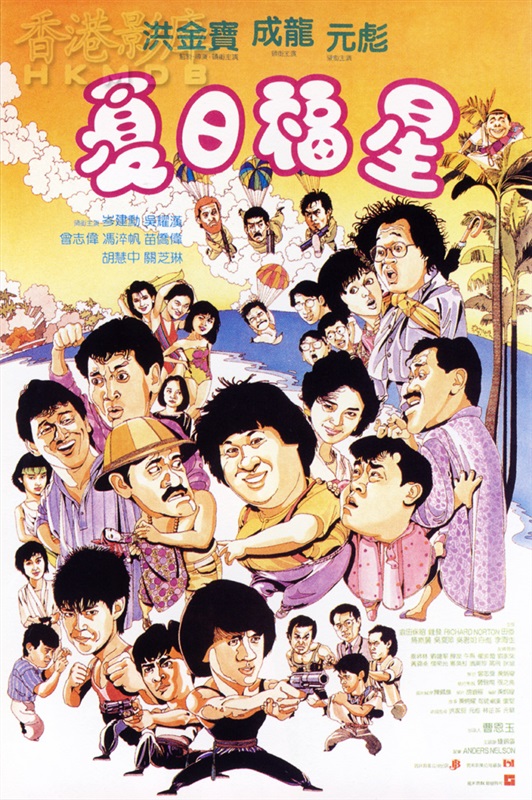 There are basically two films on this DVD. One (the one shown on the cover) is a perfunctorily plotted story about Kung Fu cops Jackie Chan, Yuen Biao and Andy Lau (yes, that Andy Lau) going up against assassins who want to kill Rosamund Kwan over a letter. This film is mostly fight scenes, and they're pretty good. Unfortunately it only lasts about half an hour. The other film follows the Lucky Stars' "hilarious" schemes in an effort to grope women half their age. Rosamund Kwan becomes their target for most of the film. Their schemes are fundamentally rather rapy, which makes this film rather distasteful and not at all funny (their schemes aren't even particularly clever or convincing).

There's relatively little overlap between these two films really, apart from Sammo crossing over from one into the other for the excellent final fight sequence. I could quite happily recommend simply skipping the sequences with the Lucky Stars and treating it as a Jackie/Sammo/Yuen Biao short with Andy Lau guest appearance.

The movie does feature practically everyone in the world in the cast somewhere or other, including Yasuki Kurata as a villain, with an excellent fight against Jackie, Michelle Yeoh in a brief cameo as a judo instructor who gets her ass kicked by Sammo, Sibelle Hu reprising her role as the police inspector Sammo fell for in MLS and, well... a whole bunch of random people at the end.

I guess the Lucky Stars series was pretty popular in HK at the time, but it must have been a time and a place thing or something... apart from the fight sequences you've basically just got an episode of Benny Hill :-(