Directed by
Genre
Story is just too complicated for a film? 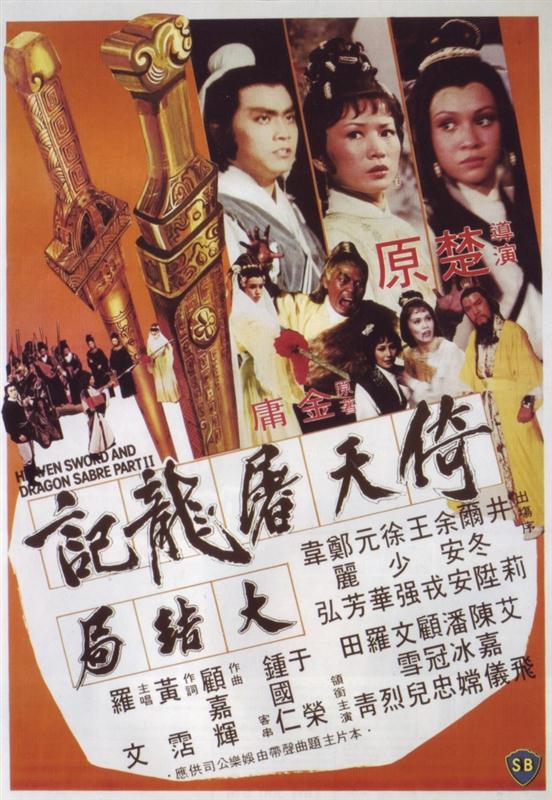 Jin Yong's HEAVEN SWORD AND DRAGON SABRE story is spread across 5 volumes, and is a supremely complicated story of the martial arts world. Even with a combined running time of 200 minutes, the two films Chor Yuen directed simply aren't enough to do the full story justice, and unfortunately he does seem to have tried to get the entire thing into the film. The result is a huge cast that must include half the actors Shaw Brothers employed in 1978, and a new character gets introduced at least once every 5 minutes on average as the story goes through all its twists and turns. The result is just too much for the viewer to take in, and not enough time is devoted to any one part of the story to get really absorbed. It feels more like a documentary effort to list all the clans, their relationships, intrigues and betrayals without trying to build narrative tension or emotional resonance. Too many characters and too much plot is not exactly unusual in Chor Yuen's wuxia, but he was never at his best when working from his own scripts (as is the case here) and I think it needed a more nuanced pen than his to get the audience to buy into the super-complicated story.

The film(s) must have been expensive, as the production is wonderfully lavish, featuring dozens of those beautifully stylised sets that Chor Yuen wuxia specialised in, and the many many characters are all nicely costumed, and it's all well filmed. Unfortunately the action scenes are a big disappointment and drop the film several marks... they basically all consist of the characters waving their arms about in front of each other in a largely non-threatening manner, then occasionally doing a somersault or jumping past the camera on a trampoline. Very tepid choreography, and not helped by Chor Yuen's decision to film nearly all the scenes in long shot, long take, reducing whatever sense of danger or excitement the choreography might have provided.

Many people are already familiar with this story from the Jet Li film Kung Fu Cult Master, directed by Wong Jing. I think the latter effort is superior to this in most respects, but it invariably leaves people surprised and frustrated when it finishes on a cliffhanger and they learn that the planned sequel was never made. HS&DS1 covers almost exactly the same part of the story as KFCM (though the details are often significantly different - I don't know which is closer to Jin Yong's original story). At least with the 1978 film there is a Part 2 to finish the tale off though, so frustrated viewers of KFCM may wish to pick it up just to see where the story was (basically) heading :p

Really the two HS&DS films from 1978 should be treated as one 200 minute film, since they follow on directly and feature largely the same cast, crew and sets. I would imagine they were shot together and then split into two parts in the editing room. Part 2 benefits a little from the fact that most of the clans & characters have been introduced in the first part, so it can focus a little more on the actual story & the main character played by Derek Yee. It still introduces quite a few new groups and individuals, and has plot twists that significantly change the relationships between most of the rest, but it happens at a somewhat more manageable pace and leaves enough time for the viewer to start to care about one story arc before it moves on to the next (only just, in some cases!). The film is still beautiful, and benefits from giving Ching Li much more screen time, but it still suffers from exceedingly dull action scenes and a too matter-of-fact approach to the story (matter-of-fiction I guess), so emotional attachment and involvement still doesn't reach very high levels.

Or perhaps I just enjoyed it more because it covers the events after KUNG FU CULT MASTER, so I didn't know what was going to happen this time ;)