Directed by
Messy but enjoyable 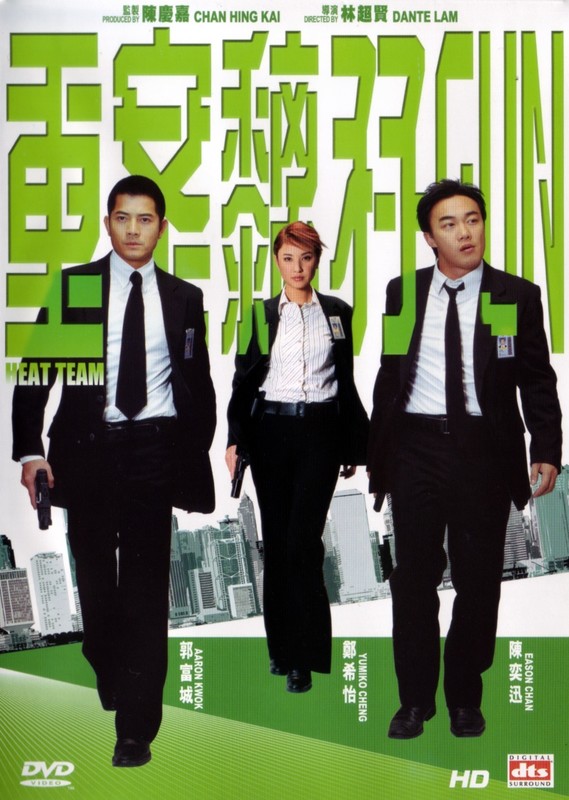 I can't say I was a huge fan of 2001's Hit Team, but that's not really relevant since this 2004 film really has nothing to do with it other than the director & name. Why they chose such an obviously similar name for this film I don't know, because there is absolutely no sense in which it's related. Well, both have cops in them, but that relationship gives a hell of a family tree.

Coming from the writer-director team that was responsible for 2000's wonderfully absurdist comedy Jiang Hu: The Triad Zone and was half responsible for the dark & smart Beast Cops in 1998, it would be easy to get high expectations for HEAT TEAM. This would not be a good plan, as any similarities to those films are minor. Instead, put yourself in mind of a Wong Jing comedy from the early 90's and you'll have more of an idea what to expect and how to appreciate it. The script is all over the place, barely meeting the minimal requirements of coherency to be called a story, and the tone of the film shifts about as if they didn't decide what sort of film they were making until they were in the editing room. And they'd had a few beers.

So, if you're expecting a smart or serious police film, walk away now. There may be elements of one in here, but they're not where the film is successful. The parts of the film that work are the playful cameraderie between the leads (Eason and Aaron), and some moments of silliness that are undeniably amusing (Danny Lee's small role offering the best of these). There's some very nicely filmed shoot-out action too, but not enough to be offered as a reason to watch the film. The stylish cinematography and eclectic soundtrack occasionally suggests that they were going for a Tokyo Raiders vibe, but not consistent enough to really offer that film as a good reference point either.

Whether you enjoy the film will depend largely on whether you like Eason and Aaron. I suspect a good 75% of you just stopped reading right there, which I think is very mean (to the actors, not to me - I don't care if you read this or not!) Both have had their bad roles, cast in films they weren't suited to, but both can be quite charming in the right film. Actually I think I've (nearly) always enjoyed Aaron Kwok's performances, and he's getting better with age. One day he'll be viewed the same way Andy Lau is now, mark my words!

The two play cops who are allegedly the best in Hong Kong, though the film never really offers any evidence for this assertion. They're assigned to a team investigating a major jewel thief who's just arrived in HK on a false passport, presumably for nefarious reasons. The head of the team is Yumiko Cheng, who's about to get married, and the three of them don't particularly get along. In particular, Eason and Aaron have a macho guy competition thing going on, and Yumiko is... err, about to get married. It's not a terribly well thought out set-up, but it serves its purpose. The other main cast member is Victoria Wu, a young hotty who's mixed up with the wrong crowd and becomes suspect/bait.

Enough of trying to explain the plot, the important thing is that stuff happens one after another and sometimes in a logical order, and that puts our major characters in various situations where we can study them and learn about them, or laugh at them when they're funny. And when it comes down to it, that's what we watch films for... right?

So whilst I can't honestly say that Heat Team is a good film, it's not quite a bad one either, though you might have to be a bit of a HK cinema junky to appreciate it. One could definitely be forgiven for wondering why a writer-director pair that's showed such intelligence and grasp of the medium in the past can't produce something a bit tighter now though.