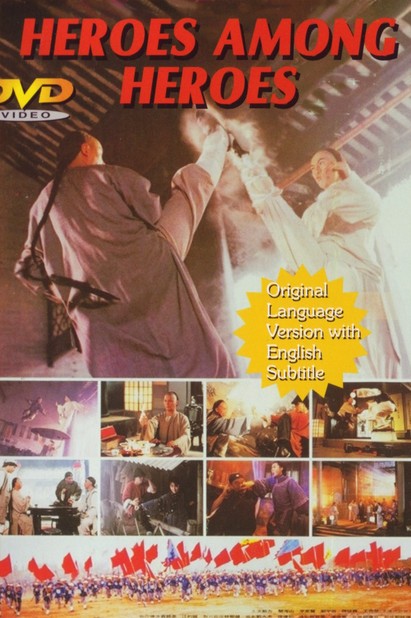 So what is it with Donnie Yen and the speed-up thing? It seems to be that he insists on being undercranked to an absurd degreee, which really just hides the talent he does have. Somebody should have pointed this out to him nearer the start of his career, and he might not have ended up failing to reach the potential that Yuen Wo-Ping at least thought he had.

HEROES... is another entry in the Wong Fei Hung series, and as somebody once said "You can never have too many films about Wong Fei Hung". It's clearly trying to be Once Upon A Time In China but on a much lower budget. The film starts off promisingly with huge armies of people running about in period costume being upset about things, but then quickly falters as we get treated to some painfully unamusing comedy, mostly centred around So's father (Ng Man-Tat) and his buck-teethed Aunt (played by somebody I never want to see in a film again - she was really annoying). Amongst this we get Beggar So meeting a very Aunt 13 type character, played by Fennie Yuen, and also getting into some minor disagreements with Wong Fei Hung (played here by Wong Yuk according to HKMDB). Fei Hung is busy worrying about the opium problem, whilst So is being a little arrogant and resents WFH's reputation as the greatest Kung Fu Master in Canton.

After a while we are introduced to Prince 13 (played by Xiong Xin-Xin and dubbed by somebody inappropriate), who is the corrupt official cooperating with the evil westerners to monopolise the opium market and exploit his countrymen. He manages to manipulate So's arrogance to get him to fight on his side against Wong Fei Hung.

Much of the first half of the film is a mess and irritating, but around the half way mark it manages to pull itself together. It drops the comedy & irrelevant side stories for the most part, and focuses on the Wong Fei Hung / Prince 13 conflict, with Donnie caught in the middle. With a new focus comes more quality and intensity, and the last half of the film is very enjoyable. Wong Yuk is good as Wong Fei Hung, carrying something close to Jet Li's gravitas, and Xiong Xin-Xin is good as the evil Prince. Donnie gets by as So. There's quite a lot of action in the latter half, and most of it is less sped up than the early Donnie scenes. It's fairly typical Yuen Clan stuff, but obviously didn't have the budget of the better films of the period as the sequences don't seem to have had as much time or attention put into them.

Overall, not a bad entry into the genre, but would have been better for having 15-20 minutes edited out of it I expect.

aka HEROES AMONG HEROES