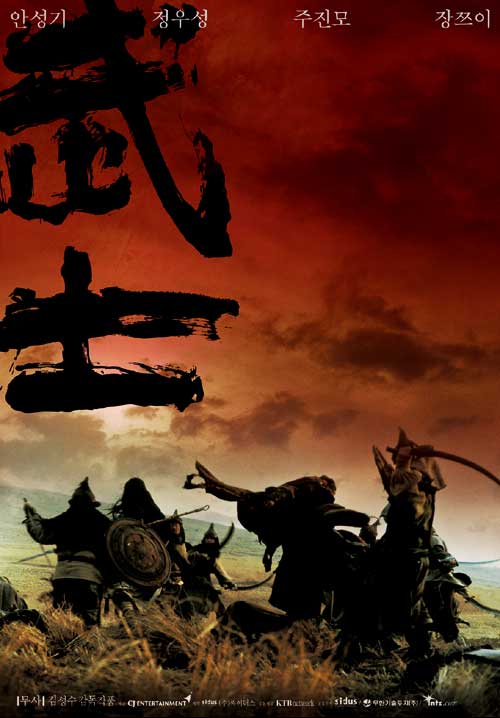 I think it was nearly a year ago that I came across the website and first started anticipating the movie eagerly. The site contained lots of stills from the movie throughout, and every single one of them was utterly beautiful, like it had been painted to perfection rather than captured in motion. It seemed unreasonable to expect the whole movie to look that good, but I was pretty sure that it was going to be impressive. With so much anticipation and hope for a movie, it seems almost inevitable that you are going to be disappointed when you finally see it. All the more surprise then that MUSA meets and surpasses my expectations in every way!

First things first, yes... it really does look that good! All the way through . Like Zhang Yimou's Shanghai Triad, practically every frame is beautifully composed and rendered, and could easily hang on a gallery wall somewhere. There wasn't a single shot that I could imagine looking better than it did. The production design is incredible, the locations stunning, the special effects groundbreaking (the gore). I can't imagine how much time and money must have gone into its production, let alone talent and dedication.

MUSA is epic in the word's biggest sense - I couldn't help thinking of Homer's ILIAD and ODDYSEY in many parts, and those are basically the two stories that the word 'epic' was invented for. It makes Gladiator and Crouching Tiger, Hidden Dragon etc look positively inconsequential. The movie is also made with an attention to detail that is remarkable. It is certainly the most convincing evocation of [relatively] ancient times that I have seen. You will really believe that you've been transported back to 400 something AD China, where Zhang Ziyi happens to be a princess and Yu Rong-Guang a Mongol general. I really felt "Yes, this is what life was like back then. This is how things looked, this is how people behaved".

Despite the epic nature of the story, the central focus is always on a small-ish cast of characters, each of whom is very well conceived and developed throughout the movie's course. I'd guess there's about 15 major characters in the story, and a significant cast of minor characters. The performances are all superb - I'm pretty sure the actors themselves were quite convinced they really were their characters. The believability is enhanced by the costuming, makeup and I guess just good casting - all the different factions involved in the story totally look the part.

No epic would be complete without battle scenes, and MUSA has quite a few. These are all stunningly choreographed and filmed, not in a HK style like Bichunmoo, but in a completely real style. Beautifully shot of course, but the men fight like skilled soldiers really would (I'm sure), and get wounded/killed equally convincingly. The special effects of arrows and blades penetrating flesh are sometimes shockingly convincing. This might be disturbing to some, but it isn't played for titillation - it just adds to the gravity of the experience. It may be a little conspicuous that the heroes all manage to dispatch many times their own body weight in enemies, but you've got to give them *some* leeway for narrative convention .

There is a lot of planning involved in the battles, of a military nature, and this is also very convincing and fascinating. Almost as large a part of the process as the actual getting down to it with the weapons. A very believable insight into how battles were waged in the days when a bow & arrow was as hi-tech as weaponry got.

Hmmm... is there any aspect of the movie I haven't gushed praise over yet? A nod to the soundtrack I guess - good, very fitting. Sound effects in the battles are excellent. Ummm... and the lighting is really good too .

A cursory nod must be made to the films flaws as well though, lest I leave the reader with expectations of *total* perfection. The main flaw is that the movie wanders rather too far into melodrama & a little cliche towards the end. It would probably be kind of cheesy, except that it's all so well done you can't get too upset with it .