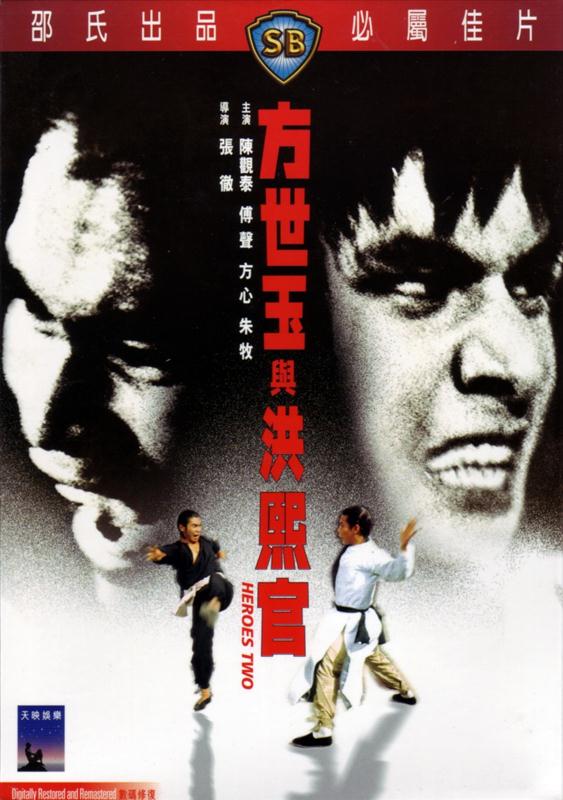 The Celestial Pictures remastered releases of old Shaw Brothers movies are one of the best things to happen to HK movies in a long time, and particularly welcome now that the former colony seems to have almost completely stopped making new movies of note. I've never really been an old school fan, largely because I just could not appreciate the movies properly on the horrible cropped and dubbed VHS-sourced releases that were the only way to see most Shaws movies until now. It's great to be able to see them as they were meant to be seen, and the quality of these remastered discs often surpasses that of many much newer films released in HK.

HEROES TWO is a movie by the legendary director Chang Cheh, the man most strongly associated with Shaw Brothers and Kung Fu Cinema in the Western world. I have to admit that I'm not tremendously impressed by his films overall though - certainly compared to those of King Hu or Chor Yuen. HEROES TWO is apparently one of his best though, and it is indeed pretty good.

Like Warriors Two, the suffix does not indicate that the movie is a sequel, but rather that it is about two heroes ("TWO HEROES" doesn't have the same ring, you must admit). These heroes are both graduates of Shaolin Temple, played by Chen Kuan-Tai and Alexander Fu Sheng.

The movie begins with the burning of Shaolin by the Manchus, from which Chen Kuan-Tai barely escapes after fighting off hundreds of soldiers. Fu Sheng hears of the burning and wishes to seek revenge on the Manchus... however he appears utterly incapable of recognising them when he meets them. To make matters worse, a bunch of Manchus manage to convince him that Chen Kuan-Tai is actually a thief and murderer, so he goes off on a self-righteous mission to aprehend him. TWO HEROES... brothers but now unwitting enemies.

This was apparently one of the first movies to focus on Shaolin Temple... though it's hard to imagine a time when movies about Shaolin weren't coming out of Hong Kong every other week. One wonders how much influence action director Lau Kar-Leung had on the decision to tell a Shaolin story, as he has shown a particular fondness for the temple in his own movies.

Lau Kar-Leung's influence is clearly felt in the fight scenes, which many regard as the primary reason the movie was so successful and groundbreaking, because it forgoes swordplay for more hand to hand combat. That's what they say, anyway, though I'd have thought Bruce Lee already started that trend several years earlier. There's lots and lots of fighting in the movie, and there is some nice intricate choreography that moves at a fairly furious pace. The fights do look a little bit dated though, but are already a long way ahead of stuff like HEROIC ONES. One is particularly impressed by Chen Kuan-Tai, who fights fiercely and skillfully.

Chen Kuan-Tai was definitely one of Shaw Brothers' best actors, to my mind - he had a great look and plenty of kung fu skill. I was much less impressed with Fu Sheng though - his nose is too big, and he seemed a bit too young and clueless to be playing a hero. Naivety was a significant part of his character though, so maybe that was just good acting. I found him a little bit annoying though.

HEROES TWO is a pretty good Kung Fu movie, and fans of Chang Cheh should be thrilled at the high quality of the Celestial release. I think its appeal is rather more limited than the sumptuous wu xia films of Chor Yuen though. It doesn't have their depth or their production values, though it does have more action and more bloodshed.

Recommended for people that like men to be real men (and/or shirtless) and anybody that likes Chang Cheh. Interesting but not essential for the rest.