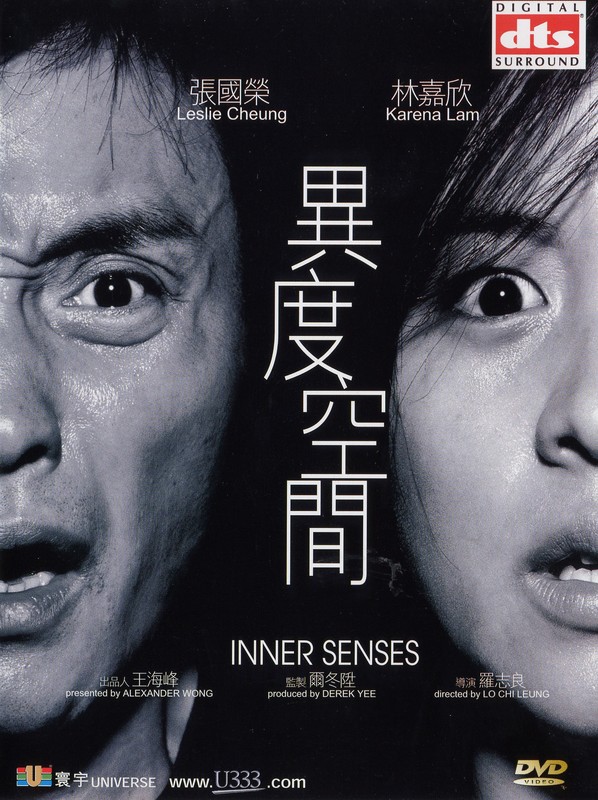 Leslie Cheung doesn't make a lot of movies these days, so the chance to see his latest on the big screen was reason enough for me to drag my ass into the city on a Saturday. It seems like since SIXTH SENSE every man and his uncle can see ghosts, and this time it's new young actress Karena Lam with the dubious gift. Or is she just mad? That's what her family assumes, so they send her to see psychiatrist Leslie Cheung. The movie is probably less about Karena's sixth sense (sorry, inner sense) than it is about Leslie's own issues.

The movie starts off promisingly, with some very smart observations about people and psychology, had me thinking "hmmm, good observation" quite a bit. Further good promise comes from Karena's acting, which I would say is pretty good. Things are obviously a little bit derivative of SIXTH SENSE, but the movie eventually peels away and sets off in its own direction. Which is where it all falls apart :(. The nice intelligent feel that the early parts of the movie show is quickly betrayed, as the interesting questions it promised to address are dismissed with completely shallow and illogical plot progressions. Characters are developed to about 3mm depth, and gaping plot holes leave a general sense of "whatever". All of this builds to a conclusion so stupid and cheesy that the positive feelings I had at the start of the movie were a source of great embarrassment.

I didn't really like SIXTH SENSE - I thought it was pretty shallow and dumb, and certainly overhyped. INNER SENSES is much worse though. I haven't seen Visible Secret, the other conspicuous HK knock-off, so I can't say how it compares to that.

Leslie is a great actor in my opinion, but not a completely versatile one. This wasn't a good role for him to take. Maybe Francis Ng could have turned the script around and given the character depth enough to gloss over the movie's flaws, but Leslie just isn't *that* good.

I can't really recommend the movie, but then I'm not a big fan of ghost movies. I can't say it's particularly scary, but I rarely do find movies scary. At least this one is actually trying, unlike the usual horror-comedy hybrids that Hong Kong film makers can churn out on a budget of $5 and half a day's work. If you liked SIXTH SENSE, you might like this too. Probably not *very* much though .