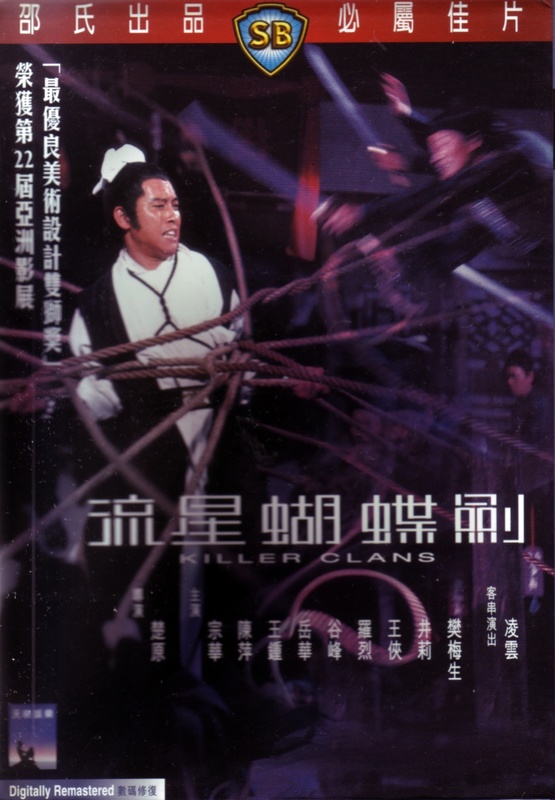 Maybe it's 'cause I've got a lot on my mind right now, but the 2nd film I watched from the Celestial Shaw Brothers archives was at least as difficult to follow as the first (The Heroic Ones). It all started coming together towards the end, but for the first half I really couldn't follow who was who and what they all wanted from each other. Those of us who have seen and enjoyed later movies such as Swordsman II and Butterfly And Sword should know that it's not essential to follow what's going on to enjoy a good wuxia movie, though, and KILLER CLANS is no exception.

The plot does feature some rival clans in the Jiang Hu, some classic beauties and chisel-jawed swordsmen, and tons of intrigue and conspiracy. I can't really summarise it much further

I enjoyed KILLER CLANS a lot more than THE HEROIC ONES, even though it made about as much sense. One reason was the visuals - the sets, costumes and cinematography were all drop-dead gorgeous, as only a Hong Kong period movie can be. Not quite King Hu level, but way above Chang Cheh. Also, the action was far more inventive and impressive here than in HEROIC ONES. The Hong Kong martial arts movie had moved on a lot in those 6 years (which did include Bruce Lee's entire career after all), and Yuen Cheung-Yan's choreography is great. There were still many techniques left to be developed before the wire-fu wuxia boom though, and the action is not as slick or beautiful as you get in the equivalent movies from the early 90's.

I'll probably watch the movie again before too long, and try to pay more attention when they introduce all the characters and explain what they want. I'll probably enjoy it even more when I understand what's happening :)