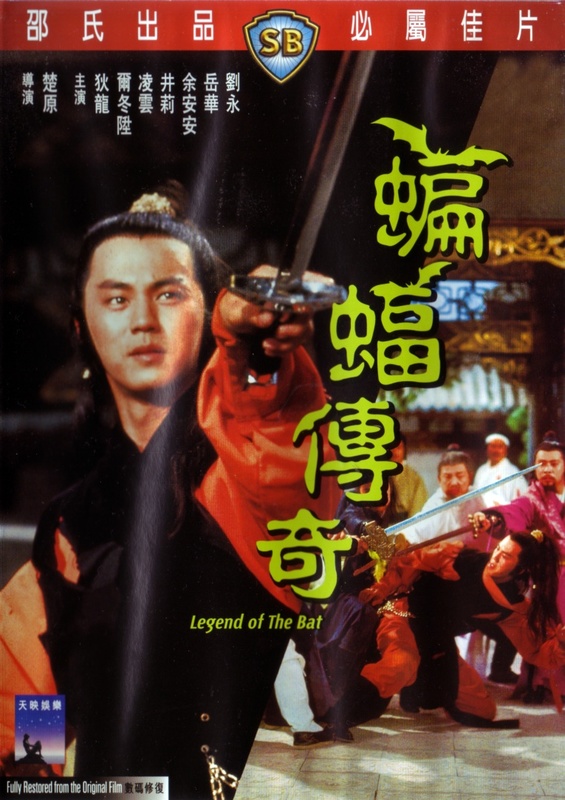 I think Clans Of Intrigue is my favourite Chor Yuen film so far, also one of my favourite Shaw Brothers films and one of my favourite wu xia pian altogether. Hence, I was very excited to learn there was a sequel! But as soon as I heard it was called "LEGEND OF THE BAT" I knew it wouldn't be as good. Bats are silly animals! Who would make a legend about them?

In fact, there are no actual bats in LOTB, but there is a Mr. Bat who lives on Bat Island (a silly place filled with dry ice and garish coloured lights) and employs dozens of guards and makes them wear silly bat(man) costumes. A silly man indeed, but also a fearsome one (even though nobody knows his true identity). Bat Island is a place where you can get anything you want... for a price.

For Ti Lung it is a poppy that draws him to Bat Island. The various other characters have their own reasons - some more sinister, some quite frivolous. Getting there is an adventure in itself though, and indeed a good half the movie is spent on the trip. One of director Chor Yuen's trademarks is that he nearly always shot on indoor sets, and it's quite amusing to see this practise carried through even to a film that's largely set on the open seas. Most of the time is spent inside a boat that seems to have been modelled on The Tardis, where there is something of a murder mystery going on. Being a Ku Long story, it's as much a mystery who actually got killed as who the killer is.

Once the characters actually reach Bat Island they find they're not all that welcome anyway, and have to form alliances if they are to ever leave the island alive.

Movies based on Ku Long stories are easy to recognise... there's always dozens of characters, all of whom are legends in the martial arts world and have strange powers or weapons and mighty intellects, and tons of class and style as well. There's always a *ton* of intrigue, with nobody ever being what they seem and more conspiracies than you can find on the entire internet. Anybody that's seen Kung Fu Cult Master knows the score.

Nobody makes better films of Ku Long stories than Chor Yuen though, even though towards the end of their extensive collaboration he does seem to have started falling into the trap of trying to include too many of Ku Long's characters and plot threads for a feature length picture. LEGEND OF THE BAT skirts a fine line - it's definitely into the 'Who what where eh?' zone, but only so far as makes trying to follow the film more fun.

And LEGEND OF THE BAT is certainly plenty of fun, with its convoluted plot line, eccentric characters and inventive fantasy. Visually, the film is filled with the usual stunning art direction and elaborate sets that characterise Chor Yuen's films, and the classic cinematography. It's all almost ruined by totally gratuitous lighting in many places though, with dry ice/smoke seemingly omnipresent, and some pretty bad miniature effects. When you see a set as fantastic as the Black Iron Cage or the Ice Cave you have to be impressed though, and it all adds to the fun in the end.

The film is less of a Ti Lung vehicle than it's predecessor, or maybe it's just that Ti Lung doesn't shine quite as charismatically. It's a vaguely ensemble piece, but Yueh Hua and Derek Yee perhaps come off the best. Yuen Wah also has quite a substantial role, but no lines as his character is mute.

Overall verdict - LEGEND OF THE BAT is pretty much as silly as its name sounds, but another highly enjoyable wu xia fantasy from one of the all time masters of the genre. Any film that manages to make the subtitle "Master, we fished four naked women" accurate and true is worth seeing at least once!