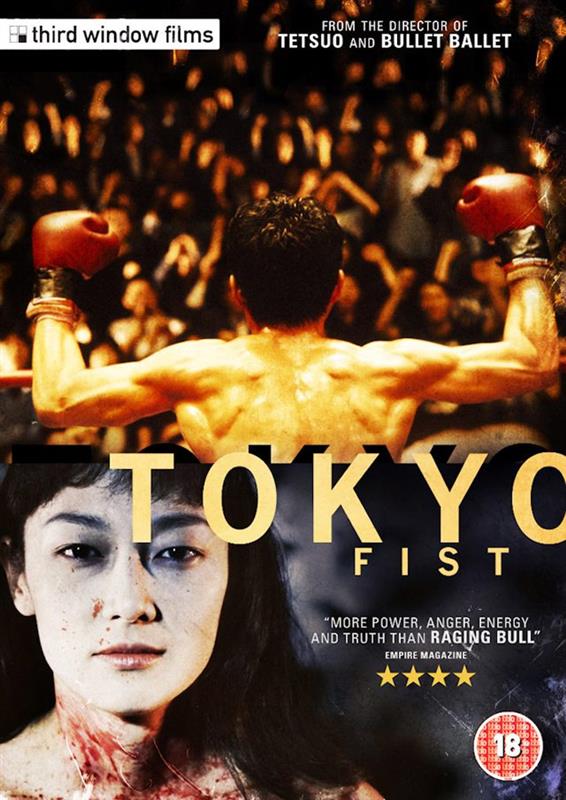 Overworked salaryman Tsuda (Shinya Tsukamoto) runs into an old school friend who is now a professional boxer. Tsuda isn't particularly keen to rekindle their friendship but when Kojima (Koji Tsukamoto) invites himself around, Tsuda's fiance Hizuru (Kahori Fujii) does her best to make him feel welcome.

After Kojima invites himself back and makes a point of doing so when Hizuru is home alone, Tsuda pays him a visit to ask what he's playing at ... this ends pretty much as you would expect. With his masculinity challenged, Tsuda naturally responds by taking up boxing himself, training hard with dreams of taking bloody revenge on his rival.

I've bought it two or three times since then, but never actually watched it again until now... partly because I was never in quite the right mood but also because I was afraid it wouldn't live up to my memories now that I'm a more experienced viewer. I'm happy to say that after 20+ years it has lost none of its impact, and it's still an utterly unique and powerful experience.

TOKYO FIST was Shinya Tsukamoto's first film after the TETSUO films that made him a household name (though maybe not in many households). In some ways it is very similar and in some ways it is quite different. It's less abstract for one thing, and actually has a discernable plot, but it is still hyper stylised with striking cinematography and an atmosphere of oppression and dread.

Tsukamoto again utilises extreme camera angles, hyperkinetic hand held shots and razor sharp editing with stark lighting and sound design to create a feeling of claustrophobia and derangement. Scenes shot in alleys and underpasses and other liminal urban spaces evoke a sense of oppression and decay that mirrors the characters' frustration and alienation. In the boxing ring the camera gets up close and personal, ducking and weaving around the fighters and occasionally throwing punches or taking them right in the face.

Tsukamoto and his real life brother deliver fantastic performances as their rivalry becomes increasingly obsessive, and seem to have genuinely gone to the effort of training and learning to box (or maybe they already boxed) as they both giving convincing physical performances. Kahori Fujii is no less impressive as the conflict between the men awakens her own latent dark side.

As a follow up to Tetsuo: The Iron Man and its sequel, TOKYO FIST is quite astute. It echoes the style and technical virtuosity that audiences would now expect from a Tsukamoto film, cementing his reputation as one of Japan's most visionary film makers whilst extending and broadens the range of expectations for his future work.