Directed by
Genre
The series falters in its 3rd outing 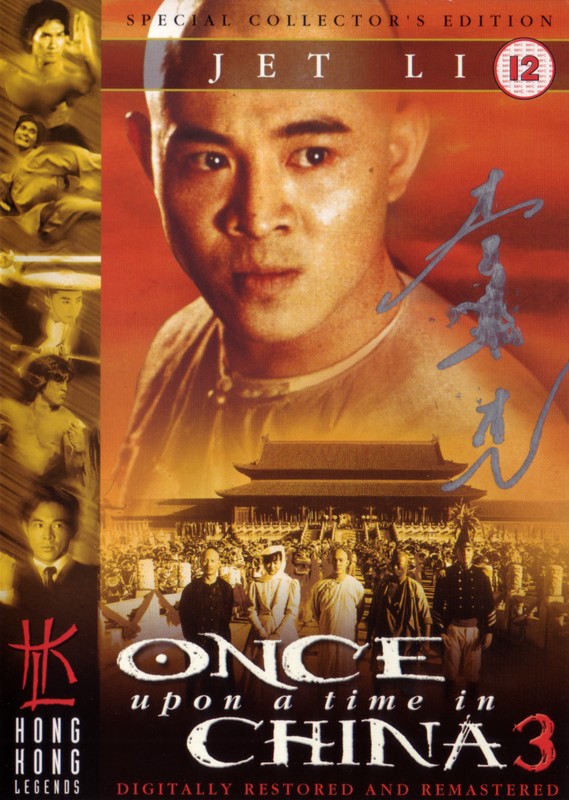 Wong Fei-Hung and his 13th Aunt travel to Beijing to visit Fei Hung's father and inform him of their intention to marry. They arrive just after Wong Kei-Ying has been beaten up by a villainous mill owner and his tame martial arts master Ghost Foot 7 (Xiong Xin-Xin). This happened because the empress dowager has called a lion dance competition to encourage the local martial artists and as a show of power for the ever scheming foreigners - mostly Russians, this time around, one of whom happens to be an old classmate of 13th Aunt who still harbours romantic feelings for her.

The original Once Upon A Time In China was a landmark, an epic that reinvented traditional martial arts as wire-fu and made a star of Jet Li. Once Upon A Time In China II was (surprisingly) a worthy sequel which preserved the virtues of its predecessor and arguably expanded them. ONCE UPON A TIME IN CHINA III unfortunately does not continue the trend, being noticeably smaller in scope and weaker in delivery.

The first two films had strong themes of Chinese traditions facing the modernising influence of foreign technology and culture, and part 3 continues this through the symbolism of a film camera gifted to 13th Aunt by her Russian suitor, leading to much confusion and embarrassment for the traditionalist Wong Fei-Hung. Even though it occupies quite a lot of screen time it feels like a token effort though, adding nothing new to the subject and being used more a source of gags than cultural commentary.

The romantic tension between Fei-Hung and his half-aunt - who turns out to have a name at last, Siu Gwan - is much more prominent than previously, having finally been acknowledged at the end of Part 2. Being thoroughly modern and Westernised, Siu Gwan wants to make their budding relationship public, whilst conservative Fei-Hung is deeply embarrassed by any public hints of affection. This side of Wong Fei-HUng, awkward and unsure, making him seem much less mature and dignified than the Wong Fei-Hung that Jet Li portrayed with such potency in the originals.

The tone is generally broader throughout, with a lot more gags and a certain cartoonishness that wasn't present previously. This is particularly so with the main villain (Zhao Jian) who mugs and cackles like the most enthusiastic villains of 70's kung fu. At least he was trying to inject his role with some character, and maybe would have succeeded except his work is largely thwarted by whoever post-dubbed him on the Cantonese ADR track as the voice and the performance don't fit together. The post-dubbing is noticably bad in general, with dialogue only very occasionally synching with the mouth movements.

The film is probably more action-packed than the first or second films, but Yuen Bun's choreography doesn't live up to the standard set by Yuen Cheung-Yan and Yuen Woo-Ping in parts 1 & 2 and there is nothing of the same quality as the infamous ladder fight or the epic pole fight with Donnie Yen. Xiong Xin-Xin is clearly trying his best, giving his character Club Foot (or Ghost Foot Seven) a unique style that is heavy on kicks and spins and is genuinely quite exciting. He almost steals the film as a result. Unfortunately he doesn't get much chance to use his style in the interminable lion dance finale, which was presumably intended to be an epic set piece along the lines of the ladder fight but is executed with far less flair and ends up being rather dull.

I guess that kind of sums up the film in a nutshell!