Directed by
8/10 - How to disappear completely 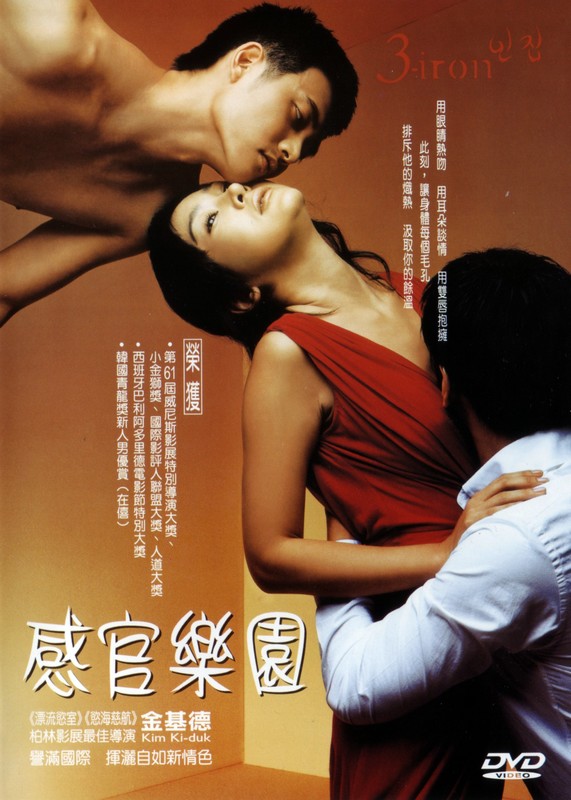 Tae-Suk goes out each morning attaching takeaway flyers to doors in various neighbourhoods. A day or so later he returns, sees which doors still have the flyers attached, and breaks into the presumed vacant homes. He's not there to steal anything though (except a bit of food), he just wants a home to live in for a while. He tidies up and does odd jobs around the place as a form of compensation.

One day he finds a flyer still attached to a door in an affluent part of town and lets himself in. He makes himself at home in the opulent mansion, not realising that on this occasion he isn't alone. The trophy wife of the resident businessman has been left behind whilst her husband is on a business trip, and is virtually haunting her own home - trapped and yearning to be free.

Kim Ki-Duk was on quite a roll in the early 2000's, releasing at least a film a year and getting a fair amount of international attention. His films tended to be more "art-house" than most coming out of South Korea at the time, and were regular fixtures at international film festivals.

3-Iron came out in 2004 and I picked up the DVD not long after, but I wasn't in quite the right mood for Kim Ki-Duk at the time... or apparently for the next 15 years. It happens.

3-Iron is unmistakably a Kim Ki-Duk film, featuring damaged people and another silent protagonist (or two). Kim is firmly from the "show don't tell" school of film-making and there are not that many lines of dialogue in the whole film - with I think exactly one of them spoken by the two main characters. Despite this we come to know them well, with their characters being revealed by their actions - and the nuanced performances of Jae Hee and Lee Seung-Yeon.

The film also gets bonus points for the regular usage of Natcha Atlas' beautiful song Gafsa to fill the silence - a perfect fit.

There is an argument to be made that Kim's films tend to be more style than substance, but 3-Iron strikes a good balance, not being overly inscrutable or relying on shocks for attention. It's probably a good starting point if you're Kim-curious... though since I've got 15 years of films to catch up on I might not be an appropriate authority on that.