Directed by
Genre
An action masterclass 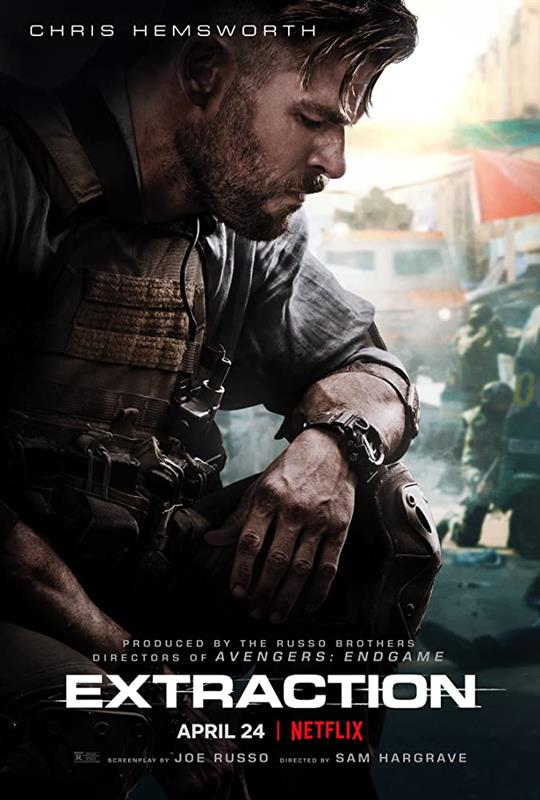 Extraction begins with Tyler Rake (Chris Hemsworth) taking a bullet and down to his last clip of ammunition, stranded in the middle of a bridge covered in abandoned cars. Things aren't going well even before he starts to hallucinate. Then the title screen appears and we cut back in time to 2 days earlier, to find out what led him here.

To cut a long story short, he's there to rescue the kid of one drug lord from deep in the territory of a rival.

Extraction is a solid film with a taught script, slick cinematography and memorable performances by the main cast. It's also a masterclass in the staging, filming and editing of action scenes.

Director Sam Hargrave has been the action director / stunt choreographer on a number of Marvel movies, most of which I haven't seen but one of which - CAPTAIN AMERICA: CIVIL WAR - was memorable for me because it was the first time a big Hollywood film featured action scenes that I felt could compete with Hong Kong's best.

In his Netflix directorial debut, Hargrave clearly set out to deliver action scenes that can stand proud next to anything out there, with fights as brutal and powerful as The Raid and gun play as technical and kinetic as JOHN WICK, all executed with the kind of creativity and dedication that would simply never have occurred to Hollywood not all that long ago.

The apex of this is a scene about 35 minutes in that starts off as a car chase, moves into a one-against-many stealth and shoot sequence weaving through the cramped corridors of a tenement building in a Dhaka slum, and ends in a punishing one-on-one beatdown in the dusty street - all in one unbroken 10 minute shot.

Even though there is clearly some smart digital editing involved there's nothing else quite like it, and the level of technical virtuosity and sheer confidence on display is astonishing.

It breaks my heart that this film is receiving only middling scores on IMDB and Metacritic - people must either not recognise the level of skill and dedication involved in the film or not care... sad, and I hope it doesn't prevent Netflix or others from giving Hargrave more chances to demonstrate his skill.