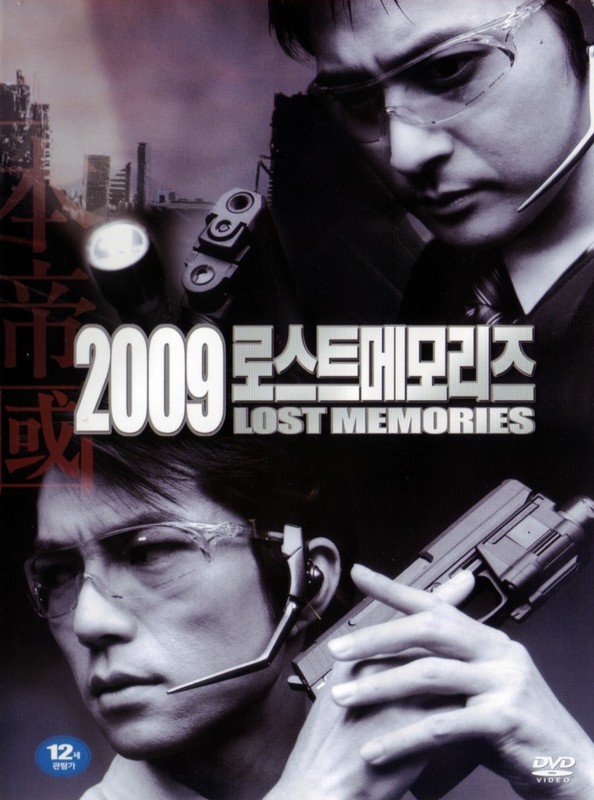 The year is 2009, but it's a 2009 in an alternate history to ours, where Japan fought with the US in World War II and won... and still occupies and controls Korea. Most Koreans have accepted the state of affairs after 100 years, but there is still a small band of terrorists/freedom fighters that want to see Korea regain independence.

Our hero is a cop of Korean descent who now works in the Japanese Beaureau Of Investigation, comfortable socialising with Japanese friends and speaking the language as default. After a major attack on an exhibition centre, however, he begins to investigate the terrorists to understand their motives. As he finds out more about their fight, he begins to question the legitimacy of Japanese occupation, and starts to feel the Korean blood flowing stronger in his veins.

Clearly inspired by the box office success of Shiri in 1999, the producers of 2009: LOST MEMORIES have conspired to produce a slick action thriller with production values that compete fairly well with Hollywood productions of only a few years back. Like SHIRI, the trade off for absorbing some of Hollywood's virtues seems to be acquiring some of its vices too - chiefly, a shallow script with major plot holes and a certain amount of xenophobia. These qualities are worse in 2009 than SHIRI, and to be fair worse than the better Hollywood productions too.

The script for 2009: LOST MEMORIES can hardly be called strong, but it is interesting and not overly predictable, despite the presence of large amounts of cheese (which maybe explains why it's so full of holes?). I did find myself checking the time quite frequently as I watched, but I got through all 130 minutes of the film without feeling too bored. It would have been much harder to say this if it weren't for the action scenes, however, which are of a very high calibre. There are just enough scenes of cool Hong Kong style gunplay to qualify 2009: LM as one of the better action movies of recent years. Also one of the more violent action movies - the body count is huge, and there is no hesitation about showing the damage a bullet can do to the human body.

The production values are mostly very high - some great sets and props (many of which get severely destroyed in the gun fights). Good cinematography, though that hardly needs mentioning for a Korean film these days. The soundtrack is perhaps a little OTT, but then so is the melodrama in the script. Acting is acceptable, though no performance approaches "great".

Overall I was rather disappointed with the film, having heard so many very positive opinions expressed about it. I liked the action, but felt the script could have been a lot better. It's a little too much like a Hollywood movie, which was probably what the producers were aiming for, but isn't what I want when I watch a Korean film. It's bound to be a film that people will be talking about a lot, and may influence the direction of the Korean industry, so any fan of Korean cinema should probably watch it if they haven't already