Directed by
Genre
Some of the best action sequences ever filmed 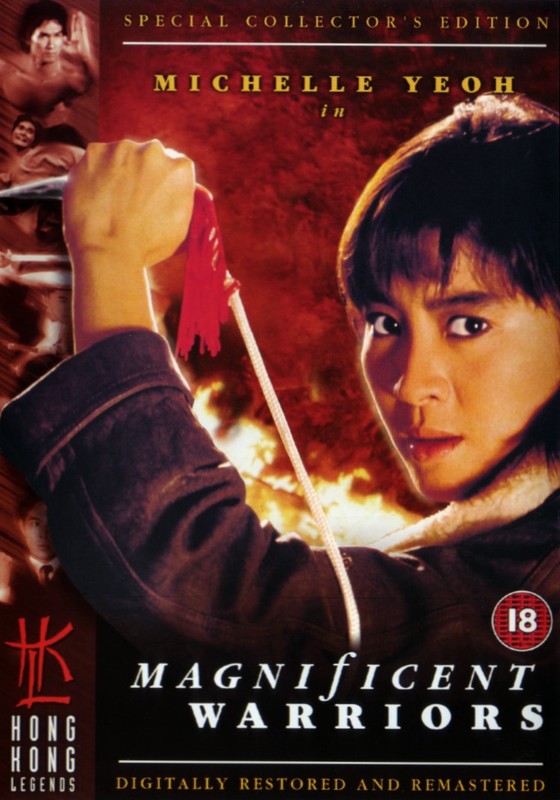 I do like Hong Kong Legends... their discs definitely breathe new life into old titles, and provide almost a new viewing experience. The first time I saw MAGNIFICENT WARRIORS was actually just last year, as the second half of a double bill at the 4 Star Theatre in San Francisco. I was half-asleep at the time, and when I left the theatre all I could recall was that there was hardly a minute of the movie when there wasn't fighting/shooting/exploding going on, and this one 20 second piece of music that seemed to loop through the entire movie. I remembered "Good action, bad movie".

This time round I was wide awake, and discovered that there is more to the movie than just action - there's actually a story there, and it's a good one. A little cheesy perhaps, and virulantly anti-Japanese, but this was the eighties. Michelle plays a chirpy adventuress in the mould of Indiana Jones, who gets sent on a mission to rescue a double agent (Lowell Lo, not annoying here for once) from a remote mountain village under occupation by the Japanese Imperial Forces. Here she teams up with Agent 001 (Derek Yee I presume) and wandering con man Richard Ng. Richard provides the comic relief, and is incredibly cute and endearing here. Derek is a little bit of a blank face leading man, but carries himself well in the action scenes. Michelle is the true driving force of the movie though, and she is just incredible here... her energy and commitment to the action scenes really shows, and she performs some jaw-dropping work here. All while carrying a wonderfully cheery smile :)

Action scenes do not actually acount for 98% of the movie, contrary to my earlier impressions. They do take up probably over 50% of the running time though. If ever a movie was "Action Packed!", it was this movie. There's endless sequences of amazingly choreographed fight and stunt work, including some of the best sequences ever commited to film in my opinion. Michelle is stunning in her power, speed and flexibility - the sheer variety of moves she pulls off is amazing.

The movie is much better than I remembered it being as well - it's well paced (i.e. fast paced), but introduces the characters just enough to get you to like them. There's funny moments and dramatic moments. And a couple of embarrassingly cheesy moments, it must be admitted. The soundtrack does feature more than one piece of music, but it is still guilty of being repetitive and often inappropriate. This is one occasion where I wouldn't actually mind Miramax replacing the score.

Magnificent Warriors turns out to be not just an action masterclass, but also a nicely rounded movie, and a fantastic testament to Michelle Yeoh's position as the world's pre-eminent female action actress. The 15 minute interview on the HKL disc also shows what a nice, down to earth and dedicated person she is. Still cute, too :D