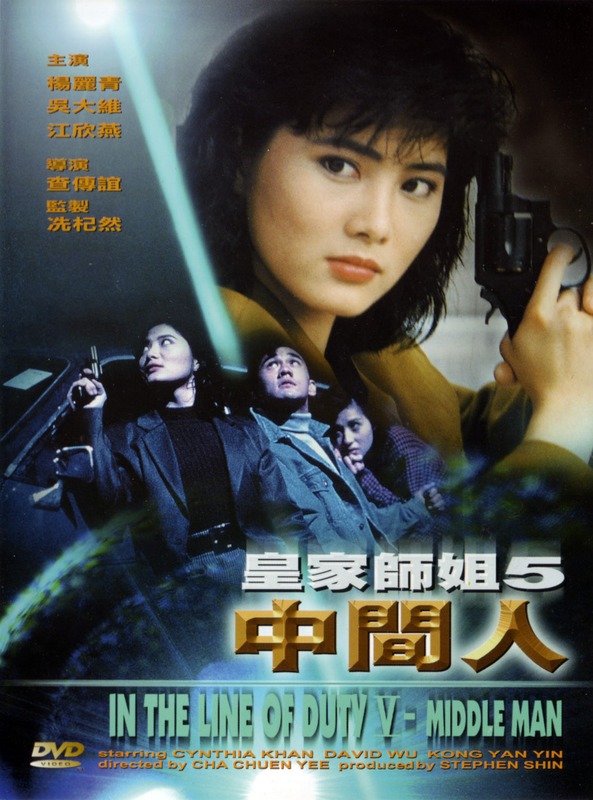 Part 5 of the most popular girls with guns movie series in the world (and one of the most action-packed series in the world) sees US Navy Sailor David Wu take his dopey face on leave in Hong Kong, where he meets up with smiley-faced cousin and intrepid policewoman Cynthia Khan. David's buddy Alan is also there, but we quickly learn that he is not just there for R&R - he's part of an international espionage ring! Or something! Pretty soon Alan's dead, and David suddenly finds that the CIA think he's a spy (and want him dead) and the international espionage ring... want him dead too, for some reason. Somehow Alvina Kong gets caught in the middle, and it's down to Cynthia to get suspended from duty and save the day.

It's not Shakespeare, I'll grant you - but then Shakespeare was a lousy action choreographer. We're not really watching for the plot (although it is an entertaining diversion), and certainly not for the acting (I note with surprise that David Wu appears to still have a career) - we're watching for the action scenes. And in the best 80's HK style, the movie is pretty well loaded with them. Cars get smashed, boats get smashed, enough glass to put windows in 3 skyscrapers gets smashed (mostly by peoples heads), and a fair number of stuntmen doubtless get smashed too. Actually, possibly less stuntmen than the actual cast - Cynthia at least clearly does most of her own stunts, and it's quite a heroic performance. It must be said that Cynthia's martial arts were never as convincing as Michelle Yeoh's, but she does well in the more athletic parts of the action scenes, and always with a clear energy and enthusiasm that lets you forgive the odd swingy-armed punch. The action doesn't have the brutal rawness of Michelle Yeoh's classic performances in Royal Warriors and Magnificent Warriors, but it's fairly inventive and well choreographed. We get the usual assortment of action set pieces - on a boat, in a construction yard, in the evil bad guy's luxurious mansion etc - enough to satisfy most audiences I'm sure. David Wu seems to be there mostly to get beaten up, which is an added bonus :)

Middle Man is the last of the ITLOD series to be released on DVD so far - the series runs up to 7, but I guess by part 5 the audiences had got a little tired, or the 80's style modern day action had given way to the 90's period fantasies or something. Or perhaps parts 6 and 7 are just crap, haven't seen them. Certainly by part 5 there's a feeling that the genre is getting tired, though. It's not a bad movie, eminently watchable in fact - but pretty much 'same shit, different stunts'. But I can't imagine that many people would watch the movie expecting anything else - so there's no excuse to leave it disappointed :)