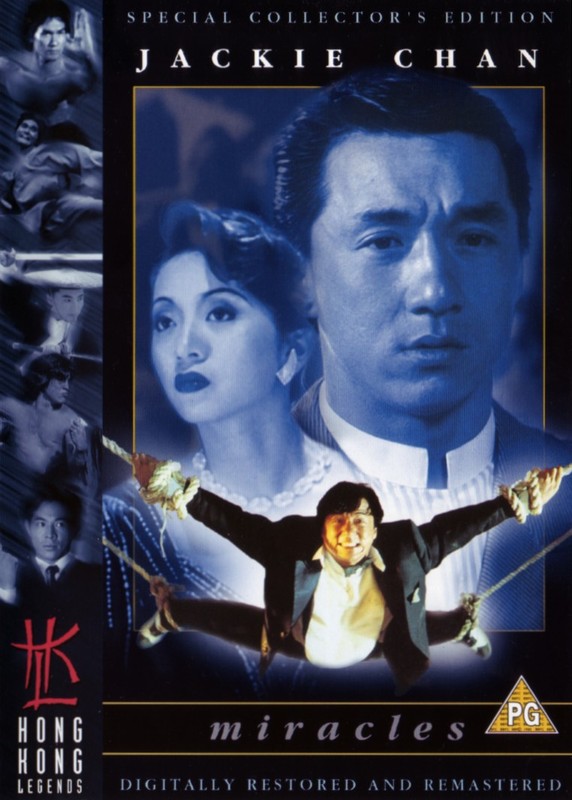 MIRACLES aka MR. CANTON & LADY ROSE (aka "WHEN BAD GUYS DO GOOD", as of now). This was Jackie Chan's answer to critics who said that he could only direct action films. "Oh yes, how about this?" he might have said. And indeed it is a well-directed film. The basic premise is that Jackie arrives in Canton looking for work, and is immediately conned out of most of his money. He reluctantly agrees to buy a rose from a street seller, and his luck immediately changes - through a somewhat unlikely series of events he in fact becomes the head of the Canton Triads overnight.

"Lady Rose" hence becomes his good luck symbol, and he always buys a rose from her before doing anything. This seems to keep his luck intact. One day he can't find her to buy a rose, and when he tracks her down at home she is most upset. Her daughter, who has been studying abroad since an early age, is coming home with her fiance for the first time in many years. Her fiance is a very well-to-do son of a Shanghai business magnate, and her distress is due to the fact that she has been pretending to her daughter for years that she is a "lady of class", and finding out that she is just a poor street seller could break her heart and ruin the marriage. Jackie (encouraged by club singer Anita Mui) decides to help her prevent her daughter from learning the truth. This requires that he enlist the support of other Canton Triads to do something good for a change.

I found the plot rather confusing for a long time - not necessarily because Jackie's script or direction were lacking, but because I was expecting the plot to be something else. I basically assumed that the story would be a love story between Jackie and Anita Mui, which isn't the case at all. The fact that the plot seemed to leap about in bizarre ways was more to do with the fact that it didn't go where I was expecting than that the events didn't make narrative sense. Hence the reason why I've explained quite a lot of the plot here, which I wouldn't normally do but I think that in this case it will help.

The story is mostly comedy with a moral message... not necessarily a moral message that I completely agree with, but basically a good-natured message. I shouldn't have been surprised that Jackie would be more concerned with promoting social responsibility than he would with a love story really - it's quite in keeping with his character I think. The performances are good all round, with Anita Mui again showing that she knows better than any other actress out there exactly when and how to overact :-) Production values are lavish, with great sets and costumes, and Jackie going out of his way to demonstrate his camera skills. The interview on the HKL disc is quite revealing, showing scenes of Jackie setting up camera shots (and operating cameras) and working in the editing room. More respect for the chap.

Being a Jackie Chan film there is some action, but overall the film is pretty action-lite. Only 2 scenes of any length I think, but they're well choreographed and staged and Jackie shows some great moves. The final fight scene (notable for not being the final scene for a change!) is quite reminiscent of the final fight in Once Upon A Time In China (MIRACLES came first), though not as elaborate.

Overall it's a good, quality film with a couple of nice action scenes. Not a film I think I'll want to watch over and over, but one that's definitely worth seeing.

aka MR. CANTON AND LADY ROSE