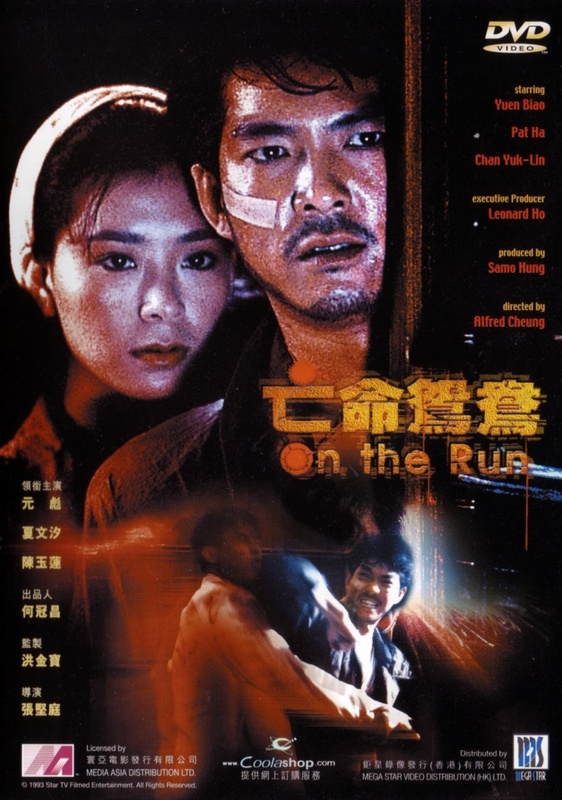 I've seen the movie three times now. The UK VHS was one of the earlier HK movies I saw, and I thought it was very good. Then I watched it again a few years later, and thought it was much more shoddily made than I remembered it. Third time around, I'm back to my original verdict - a very well made movie, with excellent acting and a script that is very dark and cold by Hong Kong standards. Yuen Biao and Pat Ha end up being brought together by the old favourite, a group of master criminals trying to kill them both. Quite who and why and how I will leave you to discover.

Alfred Cheung's filmography as director and writer tends mostly towards light comedies, so ON THE RUN was definitely a departure of style for him. The movie is shot entirely at night, lots of rain and neon and sharp lighting making for quite an unusual colour palette. The cinematography throughout is excellent. The direction maintains this darkness, sparing little time for sentiment in the relentless flight and pursuit that is both desparate and violent almost from the opening frames.

The intensity of the script is carried through in the excellent performance of Yuen Biao, Pat Ha and Charlie Chin. I don't remember seeing Pat Ha before, but she is excellent here in a female assassin role that may have been a strong influence on Luc Besson's Nikita two years later. Yuen Biao and Charlie Chin both leave their goofy sides at home, and commit a phenomenal intensity to their characters. The movie also features one of those super-cute young child actresses that you just wish they would rent out to play with for an evening once in a while, and a motley crew of old-school martial artists in henchmen roles.

The movie is not particularly action heavy, but the action that occurs is harsh. Pat Ha's trademark is a bullet between the eyes, and no bullet impact is ever left to the viewer's imagination. It's mostly gunplay, and despite all the martial artists in the cast the little hand to hand fighting that occurs is of the brutal 'smash each other up' variety. Very brutal in fact!

Not a lot else to say - an intelligent script that pursues it's dark storyline without unnecessary diversions into comedy or romance or any of the other ingredients that sometimes dilute these things. Visually superb, great soundtrack, and extremely memorable characters and performances. Grade A movie making :).