Directed by
6/10 - not awful, but not that great either 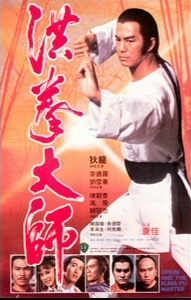 Master Tie Qiao San is an honorable and respected kung fu master, one of the Ten Tigers of Kwantung. He's also developed a bit of a taste for Opium, though, and his habit is getting worse. Meanwhile, a bunch of villains want to get rich by opening an Opium house and getting the population hooked. Master Tie's pupil Gua Si is a bit of a hothead, but at least he can see that the Opium isn't doing his master (or anybody else) any good.

There were not many good Shaw Brothers films in 1984, with Golden Harvest pretty thoroughly trouncing them at the box office with their bigger budget, more innovative productions. Opium & The Kung Fu Master seems to have been one of the studio's larger productions of the year, with some big guns in the cast, but still looks very 'old school' compared to GH films like Project A and Wheels On Meals. It was the third and final film directed by legendary action director Tang Chia, with an impressive action team, so the fight scenes are definitely of a high quality - though again, not really comparable to the contemporary work of Golden Harvest's 'Three Brothers'.

The script is not especially sophisticated, with the message of "Opium is bad, mmkay" surely being about a century too late. Ti Lung has some good moments as the majestic kung fu master, but is really overstretched when it comes to acting out the ravages of addiction. Chen Kuan-Tai clearly relishes an easy role as the chief villain, but it's left to Robert Mak to do most of the acting work in the film - which he does a pretty good job of.

Mostly the film seems too dated and naive for its time - it's not awful, but it it's not that great either. The fight scenes make it fairly essential viewing for devotees of the art, but it's otherwise mostly mediocre, and occasionally less even than that.