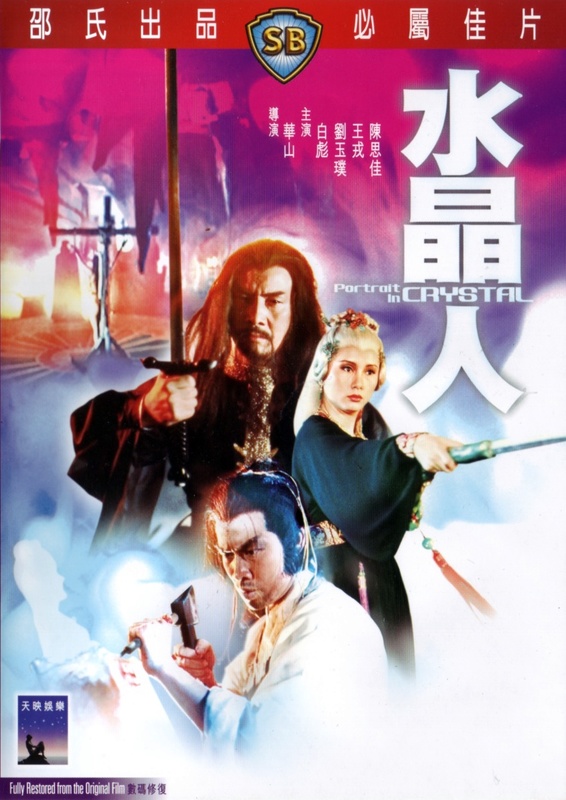 Legend has it that if you get blood on a crystal statue whilst making it, it will come to life. Long Fei completes such a statue (portrait, if you will) and drops blood on it to see what happens. Not a lot, but shortly afterwards his statue disappears and a life-sized crystal statue starts killing people in the jiang hu. He becomes a prime suspect and sets out to hide/figure out what's really going on/clear his name.

1983 saw a slew of films in the manic, wire-enhanced, bizarre poisonings style of wu xia which I have to admit is a favourite subgenre, and which wouldn't really return to popularity again until the early 90's. PORTRAIT IN CRYSTAL is one such film, directed by Hua Shan and starring Jason Pai Piao. The plot doesn't make too much sense at first (or the subtitles don't), but it develops into quite an interesting tale.

The style of the film will be familiar if you've seen such as Buddha's Palm, Holy Flame Of The Martial World or The Lady Assassin - or indeed Zu: Warriors Of The Magic Mountain to a large degree. Things move at an extremely brisk pace (the Celestial DVD is only 77 minutes, which probably means it was less than 85 on film) and are generally outlandish and bizarre, but often rather cool. Pai Piao gives a worthy but not exactly remarkable performance, and there are a bevy of beautiful babes on hand. The production is almost entirely stage bound, with sets that aren't as lavish as some but are intriguing in places. Cinematography is often quite inventive, as is the action choreography. The special effects are decidedly cheap, but cheerful.

The film isn't the best in this style, but it's plenty of fun to watch, which is not a thing to be taken for granted in this day and age!