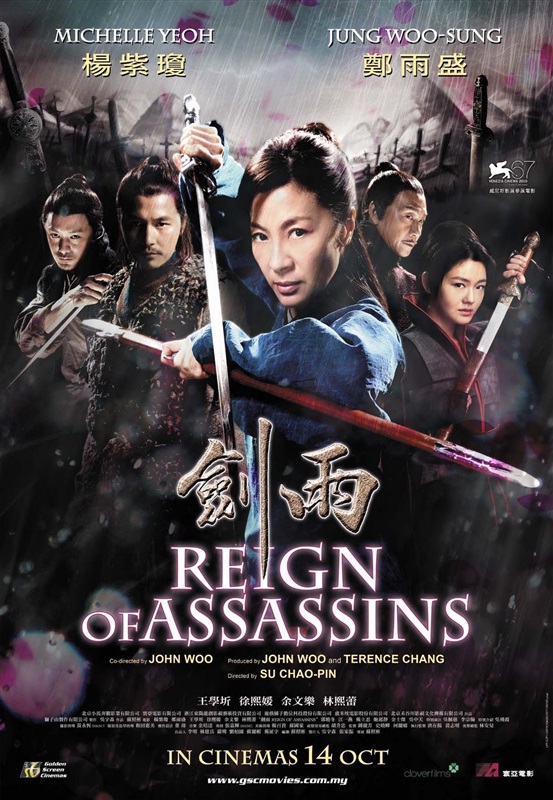 REIGN OF ASSASSINS is a wu xia film which at times evokes the stateliness of Crouching Tiger, Hidden Dragon and at others impresses with the unpredictable plotting of a Chor Yuen film. Michelle Yeoh plays Drizzle, a member of a fearsome band of assassins called Dark Stone, who wants to escape the martial world after receiving a dose of enlightenment from a Buddhist monk. She settles into a sedate life selling noodles, and enters into a romance with a quiet, simple courier. However, if we know one thing from movies it's that leaving the Jiang Hu is terribly difficult, and naturally Drizzle's past catches up with her. The film manages to squeeze a few surprises out of this plot framework though.

Production values are top notch, and the film ranks as first rate on pretty much every quality you might care to judge it by. Action scenes are decidedly on the fantastical side of the martial arts spectrum, and most comparable to those in Crouching Tiger. Acting is excellent, despite both leads being dubbed in Mandarin. Wang Xue-Qi is especially enjoyable as the main villain of the piece, but Michelle Yeoh and Jung Woo-Sung both deliver there roles with aplomb, and Barbie Hsu adds colour to her supporting role without drawing too many comparisons to Zhang Ziyi.

Looks good, sounds good, and apart from a few lulls the plot keeps things interesting throughout. Definitely worth a look!