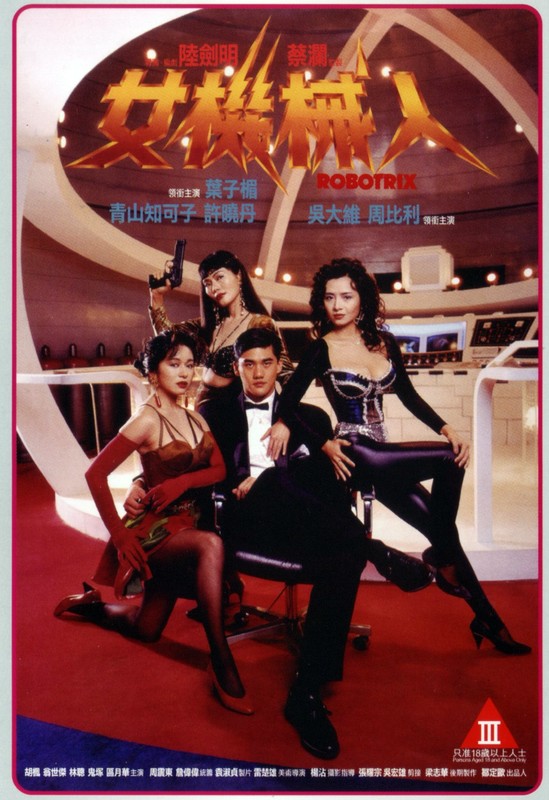 The 1980's were a pretty seminal decade for science fiction, producing (amongst many others) the classics Robocop and TERMINATOR. ROBOTRIX is Hong Kong's answer to both of those films, but with the smart, stylish vision of the future replaced by... breasts, mostly.

Female cop Selina (Chikako Aoyama) is shot by a formidable kidnapper whilst trying to protect a wealthy Sheik's son. Of course the kidnapper turns out to be a mad scientist who has transfered his consciousness into a robot, and the only way to rescue the son and stop the bad guy is to transfer Selina's mind into one of the good guy's robots. And Amy Yip has large breasts (really, that's a plot point).

ROBOTRIX is a great example of the "guilty pleasure"... something that you know is bad, and probably immoral, but you can't help liking. The script makes little to no sense, but honestly doesn't seem to be trying very hard to do so. The acting is uniformly dreadful... how David Wu kept getting work I will never understand, though I assume a contract with the devil was involved. I can understand how Amy Yip kept getting work much easier - with breasts that large you don't really need to be able to act. It's clear that she knew this too. Aoyama Chikako is only marginally less well endowed than Ms Yip... and I'm not talking about her acting (which is about equally bad), but unlike Amy she does allow her assets to be fully uncovered in this film. Billy Chow isn't exactly "Mr Emotive" either, though since he's playing a psycho robot killer that hardly matters - as Arnold Schwarzenegger can testify.

So why do I like this film again? It certainly isn't the scipt, and it can't just be the lurid sex and violence... perhaps just because it's so shamelessly trashy and daft. ROBOTRIX was actually one of the very first Hong Kong films I saw, and many years later I still remembered it well, which is more than can be said for a lot of films (including ones I watched last week). Sometimes being really bad can be a virtue in itself. OK, maybe the sex and violence have something to do with it too :p

Anyway, despite the odds stacked against it, ROBOTRIX manages to be something of a classic Hong Kong film... in its own special way :-)