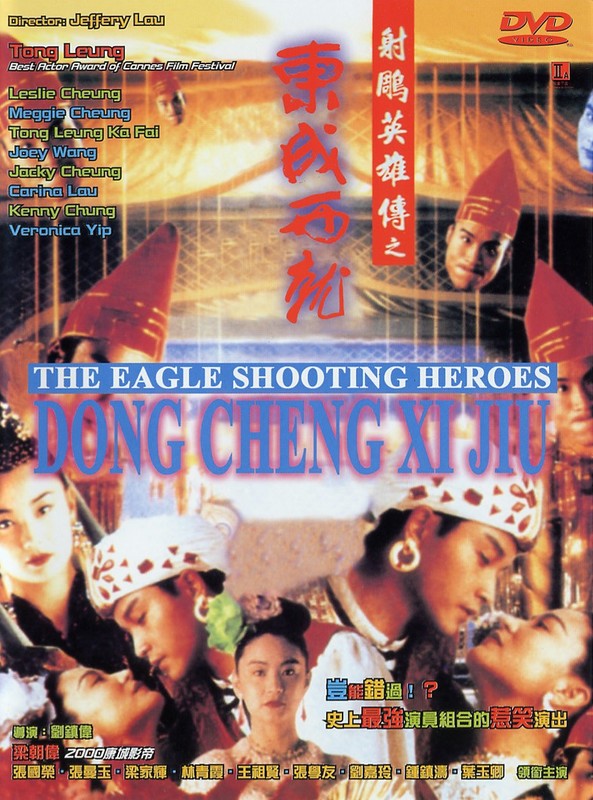 In 1992 Wong Kar-Wai took some of Hong Kong's hottest talent into the deserts of China to begin shooting his martial arts epic Ashes Of Time, based on the novel LEGEND OF THE CONDOR HEROES by Jin Yong. The production was notoriously difficult, probably because Wong didn't have more than a vague idea what the film should be about and just started shooting in the hope that it would work itself out.

After going horrendously over schedule and over budget, producer Jeff Lau apparently decided that the cast and crew needed a break and the project needed an injection of funds, so he took everyone except the director off for a while to shoot his own version of THE CONDOR HEROES, taking a very different approach to the material.

Both ASHES OF TIME and EAGLE SHOOTING HEROES are more inspired by Jin Yong's novels than adaptations of them. Both take famous characters from the series and imagine back stories for them. Whilst Wong's movie gives the characters tragic origin stories, focusing on their inner demons and star-crossed relationships, Jeff Lau drops them into a bewildering tale of love triangles, cross-dressing and petty schemes and jealousy. It likely had no more script than ASHES when filming commenced, and what story there is gets quickly forgotten in favour of random skits and skirmishes.

I first saw EAGLE SHOOTING HEROES quite early in my exploration of Hong Kong cinema, and it left me completely baffled - and only partly because of the lousy subtitles. The film was clearly aimed at the Chinese New Year market, typically the time when the biggest releases of the year go head to head, and audiences are looking for light entertainment to watch in groups. Jeff Lau obviously took inspiration from the mo lei tau comedies of Stephen Chiau that had dominated the box office in recent years, and it's a classic example of that "everything but the kitchen sink" style of Hong Kong film.

The characters all act like petulant teenagers, with juvenile romances, pettty jealousies, mistaken identities and gender confusions - all the classic fodder for Hong Kong comedies ... and pantomimes, now that I think about it. The comedy is broad and usually very predictable ... except when something completely inexplicable comes out of left field, which it does quite often. It's a lot like a pantomime, I guess. 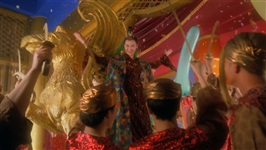 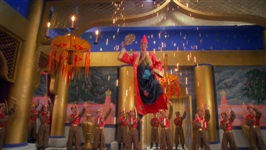 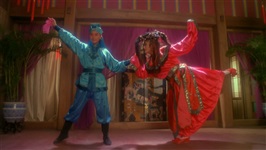 The characters from Jin Yong's novels are all masters of esoteric material arts, and that's reflected here with some really wacky, over the top wire based fights and stunts - it actually features some of the most extravagant wire work of its day - not a style you'd normally expect with Sammo Hung in the action director's chair.

The cast seem to have appreciated the chance to let off some steam and goof around pulling funny faces rather than the intense performances Wong Kar-Wai required of them - except perhaps for Maggie Cheung, who always took acting a bit more seriously than her peers and seems a bit out of place in this film (perhaps why her screen time is limited).

Whilst it may have helped provide the budget Wong Kar-Wai needed to complete ASHES OF TIME it probably backfired when that film was eventually released. With the same cast and the same source material audiences presumably expected ASHES to be the same sort of film and either stayed away because they didn't want to watch something stupid or left the theatre raging about being tricked into watching a pretentious art film. It's probably one of the reasons why ASHES flopped commercially, despite being a far more substantial and accomplished film.

EAGLE SHOOTING HEROES was clearly never intended to be anything more than a bit of dumb fun, and it's reasonably successful at delivering that, but that's about all there is you can say about it.

After writing this review I noticed that the remastered version I was watching is about 10 minutes shorter than the old Mei Ah DVD (103m vs 113m). A quick comparison suggests it is mostly Maggie Cheung's scenes that have been cut, which probably explains why she seemed a bit out of place in the film.

The scenes that were removed help to explain the plot quite a bit, so I have no idea why they were excised!