Directed by
Genre
Fine, I guess 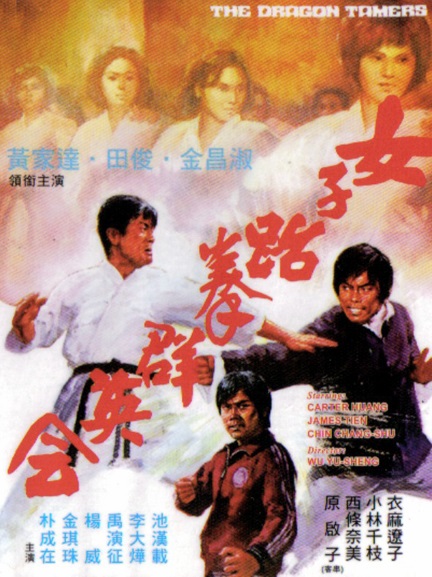 Carter Wong travels to South Korea, seeking a match against Taekwondo master Ji Han-Jae, who defeated his teacher many years earlier. Upon arrival he meets the coach of the local university Taekwondo team (James Tien), who introduces him to his sifu (Lee Dae-Yeob), who suggests he ought to learn a little Taekwondo before he faces Ji Han-Jae.

Meanwhile, the local Karate club has decided to unite all the martial arts schools in Korea - under their leadership, of course - with the Taekwondo school being the only one they are unable to beat in a fair fight.

I'm being a little bit generous to THE DRAGON TAMERS with that plot synopsis - although that is what happens, it doesn't happen in such a coherent way in the film itself.

John Woo's second film as director after the "eh, fine I guess" HAND OF DEATH is ... eh, fine, I guess. It is a bit all over the place, narratively and stylistically, and it's never entirely clear what the film wants to say.

There's a message about martial arts being for self improvement and the chance to understand and learn from your opponent, with Carter Wong having to confront a rage which is never explained or justified before he can achieve mastery.

There's also a not very subtle attempt to say something about international politics, with Karate/Japan's expansionist tendencies requiring other schools/nations to cooperate to bring about world peace ... or something.

John Woo seems just as confused about women as his mentor Chang Cheh, and after an opening scene in which a gang of women fight and wrestle in the mud with various wardrobe mishaps the female cast are mostly sidelined, although in a definite break from tradition the final showdown is against a mysterious female Karate master who out-fights most of her male peers (Ryoko Ina if HKMDB is to be believed).

Fundamentally this isn't a film anybody would bother watching if it weren't for the fight scenes, which are generally of a high standard. The under-rated Chan Chuen serves as choreographer, putting together a series of fights pitting Taekwondo and Chinese Kung Fu against Karate and each other.

Some of the fights are pretty impressive, especially those featuring Master Ji Han-Jae (a master of Hapkido rather than Taekwondo but I'm sure he knows both). A poorly judged post-sex scene serves as a reminder that James Tien really wasn't in particularly good shape even at this relatively young age, but he carries himself well enough in his fights - probably a good job Carter Wong has his back though.

Like Hand Of Death, there's little in this film to suggest that its director would go on to become an internationally celebrated action maestro (though his love of slow motion pigeons gets an early look in). I think there's a case to be made that if you take away Chow Yun-Fat, John Woo doesn't have a lot left to offer - with Bullet In The Head being the obvious flaw in that argument.

If it weren't for the fight scenes, THE DRAGON TAMERS would have to be judged quite a bad film, but the lively choreography and some charismatic villains elevates it to ... eh, fine, I guess.