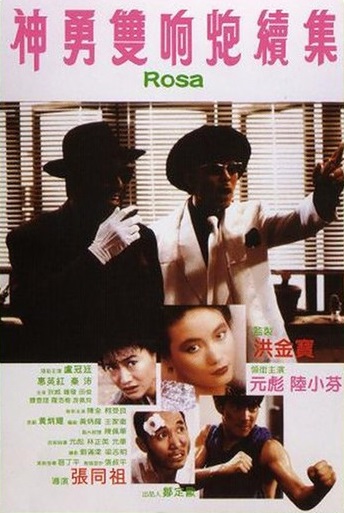 Anybody watching ROSA in 1986 would have had a hard time believing that one of the script writers would go on to become one of the most beloved directors of 'art' movies in the world (Wong Kar-Wai). "But the script is absolute junk", they might protest. "It is almost completely devoid of intelligence and depth, and the comedy is not even remotely funny". And they would be right.

The plot basically involves Yuen Biao and Lowell Lo (who appears to have borrowed Lemmy's facial hair in an attempt to look more like Karl Maka for the role) as bumbling cops who have to persuade model Rosa to give up information on her boyfriend, wanted in connection with some robberies. The plot is given minimal attention, however (and makes little sense), as most of the movie is spent on situational comedy as Lowell tries to seduce Rosa, whilst objecting to Biao's blossoming romance with his sister. It seems to be going for an Aces Go Places kind of feel, but falls into the old pit trap of being completely unamusing.

It's not often I'm so bored with a movie that I end up using fast forward, but I ended up watching much of the second half of the movie on double speed to ease the pain a little. If you should for some reason end up with this DVD and can't avoid putting it in your player, just skip to the action scene at the end. It's good, but far too short to justify sitting through the rest of this absolute junk.

I really hope that Wong Kar-Wai doesn't announce that his next project is going to be a comedy! Really!