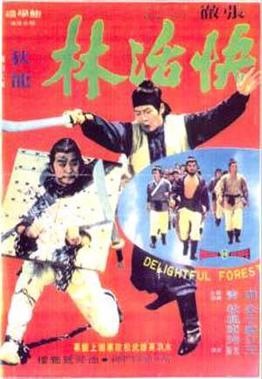 Ti Lung plays Wu Song, widely known as Tiger Killer since that time he killed a tiger with his bare hands. After taking revenge on the adulterer that killed his brother, he surrenders to the authorities and is taken to a prison camp.

The prison warden's son offers to make prison life easier for Wu Song in exchange for a favour - a villain with powerful kung fu has taken over his casinos in a town known as The Delightful Forest, and he needs somebody with skills like Wu Song's to help him take the territory back.

THE DELIGHTFUL FOREST is a spin off from The Water Margin focusing on Ti Lung's character (rather than trying to fit every character from the novel in).

Ti Lung's Wu Song is supremely skillful and equally arrogant, having absolute confidence in his abilities and never wasting an opportunity to remind people of that time he killed a tiger. He considers himself to be a righteous man and insists on being punished for his crimes - even though he clearly believes they were justified.

In contrast, the bad guys are treacherous and, in the best Hong Kong tradition, prone to fits of raucous laughter whenever they find themselves pleased with a cunning scheme they have concocted.

There's never too much doubt about how things are going to play out, and the film inevitably leads to a climactic battle where Wu Song takes on a small army of bad guys, delivering righteous justice and anger in a remarkably bloody showdown.

The film is basically a showcase for Ti Lung, as a fighter and as a charismatic star, which was a wise approach since he was in peak form on both fronts. The fight choreography is a cut above average for the time, especially in the scenes where Ti Lung's hands are bound in what is apparently a cangue, which he readily turns into a weapon to complement his powerful kicks.

It's one of the better Chang Cheh films, and definitely a must-see for Ti Lung fans.