Directed by
Genre
No real reason for this film to exist 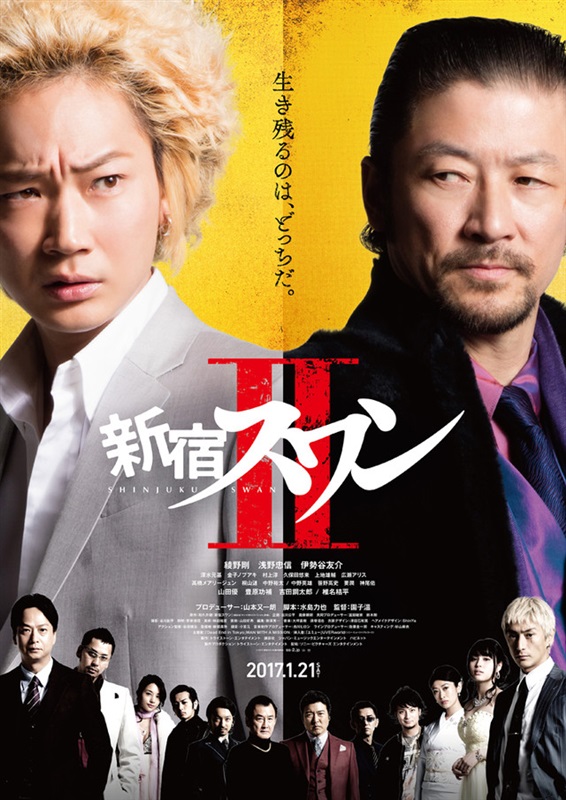 Some time has passed since the events of Shinjuku Swan and Burst has consolidated its control over the scouting business in Kabukicho, and is now looking to expand. The opening of two new clubs in Yokohama presents an opportunity as they will need 100 hostesses on the books in each, so Burst's management sends Tatsuhiko and Seki down with some of their scouts to open up a new market.

Only problem is Yokohama already has a scouting business, run as a monopoly by the Wizard agency, led by a tough nut called Taki who does not appreciate Burst moving in on their territory - and who has history with Seki.

SHINJUKU SWAN's plot is even more like a storyline from the Yakuza games than the first. The actual scouting takes something of a back seat in the film, with the focus being on the fight for territorial dominance between the groups (of mostly men). A subplot featuring Alice Hirose echoing Erina Mano's character from the first film feels tacked on and underdeveloped, and yet it is the only time the film touches on the lives of the girls being scouted at all. Yu Yamada reprises her role but is less prominent, and the only other female role of any substance is Maryjun Takahashi as "Taki's Woman", so... yeah.

One of the things which make the Yakuza games so charming is that they have these ultra-serious plots involving macho men fighting for dominance, but you actually spend most of the game following daft side quests and minigames which completely deflate the aura of machismo. Takeshi Kitano and Takashi Miike tend to do the same sort of thing in their Yakuza films (the good ones, anyway). SHINJUKU SWAN II doesn't.

Despite the film mostly being about alpha males locking horns, it somehow manages to be a lot more sentimental than the first film - especially towards the end, when a fairly minor character from the first film reappears in an absurd charicature of somebody that has succumbed to the evils of drug addiction.

There are a few good points to be fair - Gou Ayano spends less time pulling funny faces and generally overacts less, new character Haneman (Yuta Nakano) is a blast, and the fight scenes are of a higher quality. Kippei Shiina is pleasantly slippery as the head of the Yokohama wine association (though after The Forest of Love, I'm probably going to see Joe Murata in any character he plays).

Technically speaking Tadanobu Asano never actually went away, but he certainly dropped off my radar. For a while in the late 90's and early 2000's he was in every other Japanese film and was unquestionably one of the hottest properties in the country - and then *poof*... he vanished.

I gather he was still making films, just apparently not films I was watching. Until tonight the only thing I'd seen him in since 2007's MONGOL was the forgettable Filipino film RUINED HEART. It came as quite a shock to see him looking so old... I'm sure he'd say the same about me though, time isn't doing either of us any favours. This film isn't going to go on the list of legendary Tadanobu Asano performances, but he's still cooler than I've ever been even if his hairline is receding and he's gained a few pounds.

My overall feeling was that there was no obvious reason why this film was made, other than - presumably - the first one was successful. It doesn't seem to have anything particularly interesting or important to say, and most of what it does say was said better in the previous film or other films.

SHINJUKU SWAN didn't particularly need a sequel, but the characters and general setting could have generated new stories - they're still making Yakuza games 15 years after the first, after all - but despite the new location this film feels too much like they just tried to drag the first film on for another 2.5 hours after it had quite satisfactorily ended.