Directed by
Genre
Decent idea, shame about the execution 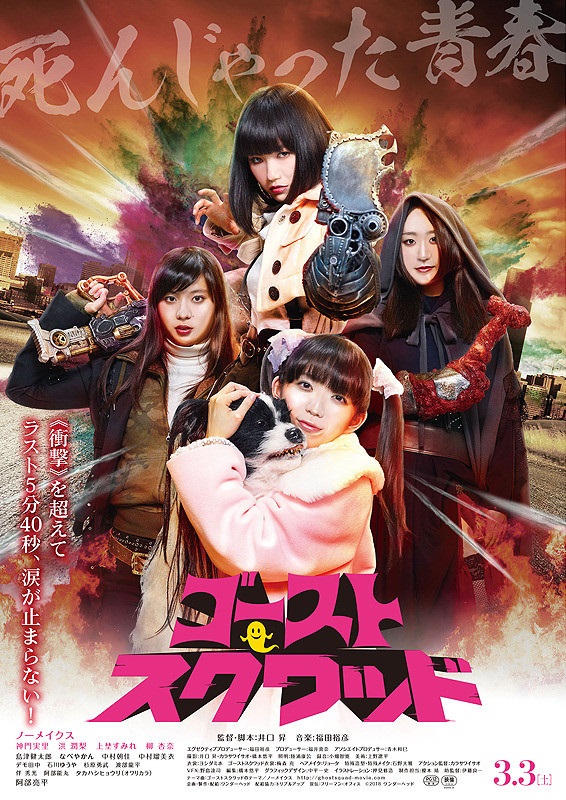 Since she was young Rika has been able to see ghosts, which is just one of the reasons she is lonely and depressed (her abusive father being another). One day when she is at a particularly low ebb a couple of ghosts appear and tell her that when she feels suicidal they can draw power from her and manifest in the world. They ask her to help them take revenge on the men that killed them, so that even if her life isn't valuable to her it can be of value to them.

This seems to be primarily an extremely convoluted setup for getting the young actresses to kiss each other.

GHOST SQUAD "stars" a girl group called No Makes, although this group was apparently created specially for their previous film DEVOTION TO CINEMA, also directed by Noboru Iguchi, and doesn't appear to have any sort of independent existence outside these two films, so I'm not entirely sure what that means.

Looking at the trailer for DEVOTION TO CINEMA, that also appears to have been a convoluted excuse to get these particular girls to kiss. It's not immediately obvious why anybody considered this an important enough goal to make two films about it.

I'm glad that Noboru Iguchi is still making films, even if since 2012 his films seem to be made on increasingly tight budgets and without the inestimable contributions of Yoshihiro Nishimura. Even though films like The Machine Girl can't have had a large budget they look incomparably more professional than films like this and Raivu, especially in the special effects department.

GHOST SQUAD feels like it wants to be as wacky and outrageous as Vampire Girl vs. Frankenstein Girl, but it is unable to deliver on that ambition. There are some wacky parts, but they aren't pulled off with enough flair or imagination to really land. The most entertaining parts tend to involve Minori Mikado's character thinking she is a puppy when she gets emotionally stimulated, which is rather adorable (if sloppy).

Although it fails to deliver the kind of delirious madness that brought Noboru Iguchi to the world's attention, GHOST SQUAD does fare somewhat better dramatically, with a focus on what the ghosts have missed out on due to their untimely deaths that is actually quite moving. The film takes a firm anti-murder stance... which is surprisingly rare in cinema when you think about it.

The fact that none of the cast are at all good at acting does detract from the dramatic impact the film might have had, unfortunately, but there is enough earnest expression that despite its many flaws it did manage to engage and entertain me, and had me smiling by the end.