Directed by
Genre
Not good, but entertaining 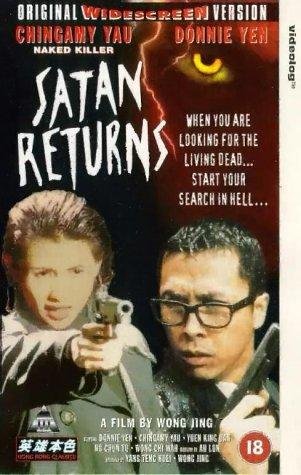 SATAN RETURNS has all the hallmarks of a Wong Jing production/script:

1. Vaguely offensive exploitation
2. Sex jokes at inappropriate times
3. Plot that would fall apart if anybody acted intelligently or consistently
4. Doesn't even try to hide the "inspiration" of other films
5. Chingmy Yau treated as if she were an actress

Which are the 5 top reasons for liking Wong Jing films, if you ask me! The film is more serious in tone than it might have been if Wong had directed as well, but that doesn't mean it can actually be taken seriously - it's far too shallow and stupid! There's little actual "horror", in the sense of being scary, despite some effectively macabre visuals and Francis Ng's creepy performance as a psycho in the service of the devil. There's really no exploration of the implications of the events, just some casual dropping in of Christian symbols and references selected at random to hang the plot off or construct some cool images on the screen. I am not offering this as a criticism, btw!

Chingmy Yau was getting to the end of her screen career by this stage, and could no longer really get by on a cute face and cleavage - which is unfortunate, since those were her only real assets (well, that and the fact she presumably put out for Wong Jing). She's thoroughly out-acted by Francis Ng and Yuen King-Tan, and even somewhat upstaged by Dayo Wong!

Donnie Yen doesn't do much in the way of acting either - he's far too concerned with looking cool, as usual. The action scenes he choreographed are a bit of a precursor to the work he did on Ballistic Kiss, with lots of shaky cameras and posing - again his main concern is to make himself look cool & tough. He overuses undercranking a little bit, as per usual. Not particularly impressive action scenes, generally, but there's a few shots that work.

So, I seem to be full of criticism yet I've said I liked the film... I can't really justify it on a rational level, but the stylish camerawork and daft storyline make the film enjoyable on a brainless level, and looking at Chingmy is never entirely unpleasant. Don't expect too much and the film won't disappoint... if nothing else, it features one of the best comeuppances a screen villain ever endured!