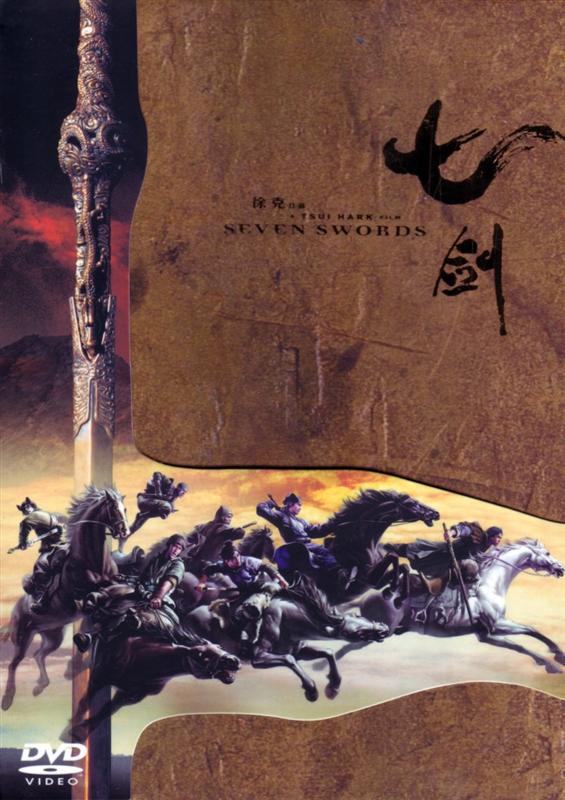 They say one good turn begets another, and so it is with films. So Seven Samurai begat Musa, and MUSA begat SEVEN SWORDS (the actual genealogy is rather more complicated than that though!). SEVEN SWORDS is Tsui Hark's attempt to regain his crown, or at least some semblance of respect, after a disastrous string of flops that began about 10 years ago. Going back to his roots, he develops a wu xia tale for the 21st century - clearly influenced by the films that have been popular during his absence from the genre such as Crouching Tiger, Hidden Dragon, Hero and most obviously Korean epic MUSA.

SEVEN SWORDS is an expensive, grand epic - originally clocking in at 4 hours by all accounts, but edited down to just 2.5 for its actual release. Watching the film it's clear that the editing has hurt the film - you can see where several characters and themes should have been more developed near the start, and at about 1hr 50 there is a *big* jump in the story that is filled in with some brief flashbacks, and was presumably meant to develop in grand melodramatic glory. Also, Michael Wong appears for about 1 minute as a general with a large army... then is never heard of again. Some may say this can only be a good thing, but he was actually quite intriguing and non-annoying in the film - probably because he'd been dubbed by somebody who could actually act. Having seen how much difference 30 minutes of cuts made to MUSA (very negative!), one can only imagine how much SEVEN SWORDS must have suffered from losing 90 minutes! Actually I can't even imagine it - I can see where about 45 minutes would have gone easily, but I've no idea what would have filled 45 minutes more.

Martial arts films tend to go in cycles, where one minute real kung fu is popular, then it's wires, then it's comedy, then it's serious. Tsui Hark's boom period was mostly when wires and comedy were de rigeur - in fact to a large degree he was responsible for that trend. His 1995 film The Blade attempted to break the mould, presenting a much darker and grittier vision of the Jiang Hu than had been attempted for many years. Audiences shunned it, but fans of the genre hold it in very high esteem - it's probably my favourite Tsui Hark film, for instance. Perhaps it was just ahead of its time, as 4 years later everybody was making serious martial arts films again. SEVEN SWORDS does resemble THE BLADE in some ways - mostly visual. Perhaps its relative success will finally lead to the high quality DVD release of THE BLADE that fans have been crying out for years.

Tsui Hark assembles an interesting cast for the film... Donnie Yen, Lau Kar-Leung and Jason Pai Piao are the veteran fighters on the team, with Charlie Yeung perhaps being a familiar face for Tsui on set, and Leon Lai's presence largely inexplicable. Leon actually does a good job with his character - he's definitely become an at least acceptable actor in recent years, which I don't think anybody could have predicted! Donnie Yen also does one of his better acting jobs. Most of the remaining cast is composed of actors from the Mainland, who all do a good job too. To add a bit more pan-Asian appeal, Korean babe Kim Soo-Yeon returns the favour of China lending Zhang Ziyi to Korea for MUSA (though her acting isn't as good, so I think Korea still owes China one). Generally the film is well acted though!

The film is visually luscious, making good use of the Chinese landscapes for a dusty, earthy and realistic feel to the film. It all seems expensive, with some great sets, costumes and props etc - certainly higher production values than any of Tsui's older Wu Xia Pian, even the first two Once Upon A Time In China films. The soundtrack has been criticised quite a lot, and it's certainly not one of Japanese composer Kenji Kawai's better works - but it's not the sort of film or style of music he'd usually compose, so I'm not sure why he was chosen except perhaps to get some free publicity in Japan... or perhaps they just thought that bringing in some outside talent might produce interesting results - A.R.Rahman did a stellar job on Warriors Of Heaven And Earth, which was totally unlike the sort of soundtrack he's usually done. But A.R.Rahman is a God of Music, and Kenji Kawai is just pretty good ;)

Being a Wu Xia Pian, there are of course some fights. Lau Kar-Leung heads the choreography team, sending out a message straight away that Tsui wanted more gritty, down to earth fighting than the wire-fu he has favoured in the past. Stephen Tung Wai and Xiong Xin-Xin (both part of Tsui's team for THE BLADE) also get choreographer credits, suggesting that Tsui didn't want to rule out having some fancy flying completely :) In fact the action is a mix of intricate weapons work and exaggerated physicality, but nothing of the sort of laws-of-physics-denying stuff that was going on in the early 90's. The result is sadly not terribly spectacular, but mostly because of the way it's filmed - too many close shots that disguise the intricacy of the choreography, and cuts that break the fluidity. Not awful by any means, and even quite good - but a little disappointing, given the high hopes. The action in THE BLADE was better, IMO (though it's been a while since I saw it, maybe it wouldn't hold up so well these days).

Overall, I found SEVEN SWORDS to be a satisfying enough package, but not one that left me grinning like a kid in a candy store the same way MUSA did. Perhaps that would change if I saw the full 4 hour cut, and I hope some day I'll get the chance.