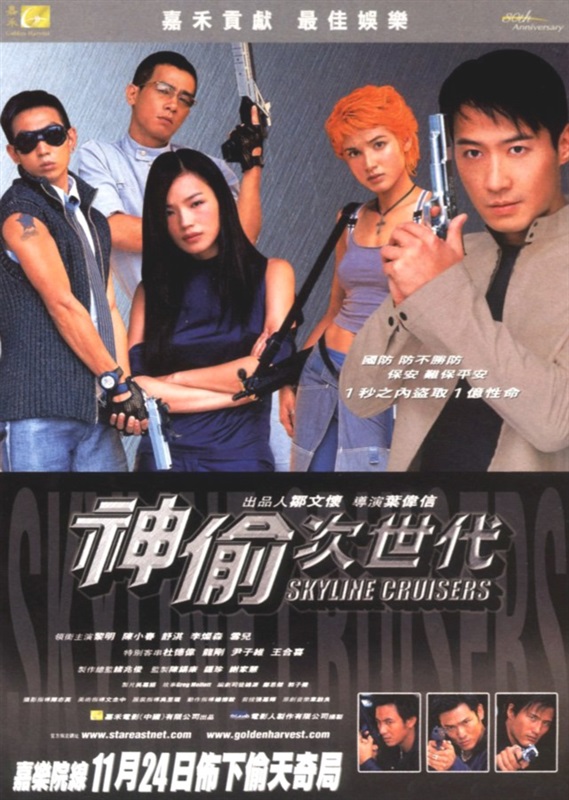 Well, I held off buying this one when it came out, even though Wilson Yip's two previous films were two of my favourite movies of 2000. It seemed like nobody liked SKYLINE CRUISERS though. However, after a year I figured my expectations were finally low enough, and 2002 convinced me that with Wilson Yip behind the camera there must be at least something salvageable from the movie. But I was wrong :(

Skyline Cruisers really is a very bad movie - on pretty much every level. It's pretty much a textbook case of bad movieness. I'd like to say that it's just that even Wilson couldn't save the movie from such a bad script - but it's bad above and beyond the dumbness, shallowness, convolution and tedium of the script. Scenes seem carefully crafted to evoke no feeling whatsoever (except occasional ridicule). They almost seem to go out of their way to make sure characters have no depth or definition whatsoever. Classic moment - one of the characters shoots another character and everybody just kind of looks around blankly (including the character that got shot), then it cuts to the next scene.

Of course, it's nowhere near as bad a movie as Martial Angels - it does have a certain slickness that saves it from being laughably bad. Although perhaps that's a weakness, on reflection - you're not even offered that diversion. A couple of the action scenes show a glimmer of being interesting style-wise, but then end up not being after all. And then there's the Orang-utan of course... no, wait, that's not "of course", it's completely inexplicable.

The one redeeming feature the movie does have is that Shu Qi is in it. A bit. And she looks quite pretty. They could have made more of that aspect by, for instance, cutting out all the rest of the movie. The only other good thing about Skyline Cruisers is that it sucks. Oh no, wait... that's a bad thing too, isn't it?