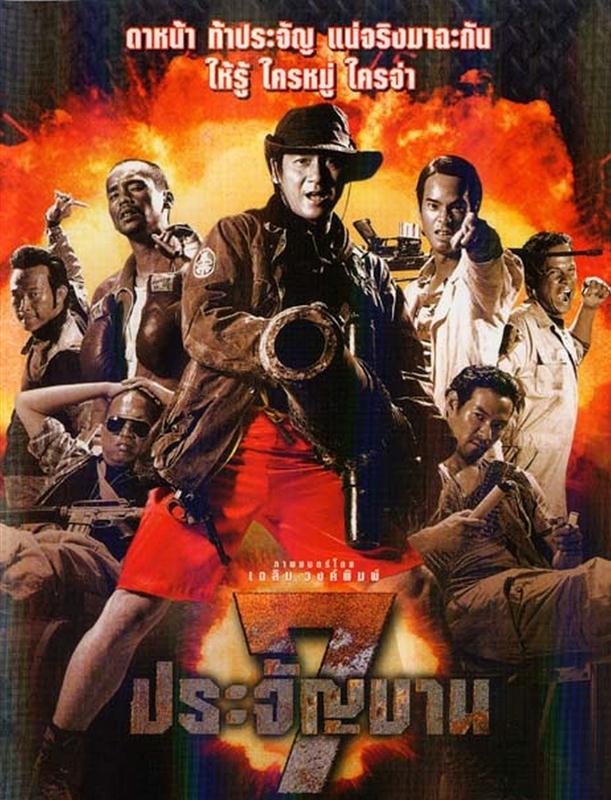 Heaven's Seven aka 7 Prachabaan aka 7 Pra Chan Ban aka 7 pra-jan-barn is a new movie from Thailand, billed an "action comedy" with a seemingly high budget that's bought some explosive action and some special effects that are quite good, in a bad sort of way (or bad in a good sort of way).

Since I'm probably one of the first westerners to have seen the movie I probably should write a long detailed review, but there doesn't seem much point since I'm just going to conclude that it's not a very good movie and you'd be wasting your time trying to see it.

The movie takes a Kelly's Heroes kind of plot where 7 inept soldiers have to transcend their failings when they get mixed up in a plot by American soldiers to bury napalm on Thai soil, and totally mismanages it. It tries to introduce way too many characters and fails to develop any of them. The story has no narrative structure and fails to create any real interest. Quite a lot of effort has been put into the action sequences, but they're still well below the quality of a Hollywood or Hong Kong action movie. Some of the special effects are pretty good, but they seriously overstretch themselves in the finale and look silly as a result. The comedy either doesn't translate well or simply isn't very funny (on the subject of translation, I don't know how accurately the use of the F word in every other sentence (sometimes more than once) in the subtitles reflects the Thai, but it sounds kind of like the subtitler was just seeing how much swearing he could get away with when nobody else speaking English was likely to see the film).

It's always nice to see Americans as bad guys once in a while, but the movie fails to really convince that soldiers secretly burying napalm are any worse than the generally treacherous and mean spirited Thai soldiers that are meant to be the heroes. The American actors in the cast are also much bigger, butcher and meaner looking than any of the Thai cast - plus their characters are clearly vastly more professional and better trained. Its really hard to believe that they wouldn't just walk over the heroes in 20 seconds flat.

Well, I guess I already wrote more than I meant to. Really the movie's not very good, and I don't recommend exerting any effort whatsoever to see it. Oh well, I guess you aren't going to get a Monrak Transistor out of Thailand every time :)