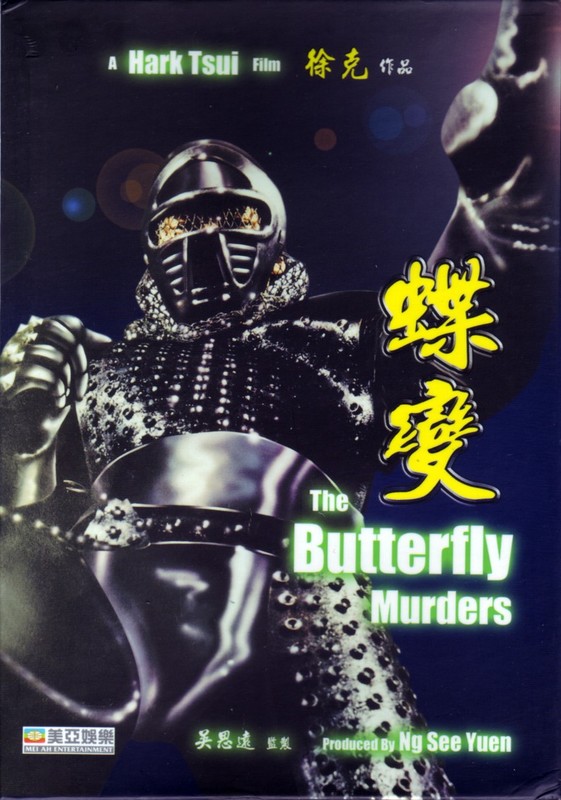 A bunch of killer butterflies are on the loose, and most of the inhabitants of Shum castle have been wiped out by them. A swordsman, a spritely young wuxia lady and a writer all meet up at the castle to try and work out what's going on. They are quickly forced into a labyrinth of passages beneath the castle, where the remainder of the movie plays out in Agatha Christie whodunnit fashion. Where do these butterflies come from and what's their agenda? What secrets and motives do the various players brought together in these tunnels hide?

Unfortunately both the VCD and DVD releases seem to be missing a chunk of footage near the 60 minute mark, which makes figuring out the answer to those questions harder than it might have been... one second somebody's about to read an important letter, the next somebody's getting their arm cut off and somebody else is being set on fire. Since two separate releases have the same footage missing I assume the original reel is lost/damaged, and a complete print may not exist anymore.

The fact that several key players looked rather similar also meant I wasn't entirely sure who was who at times, but after a third viewing I think I managed to follow all the important developments!

Being Tsui Hark's first movie and claimed by some people to have been his best, and one of the first of the "new wave" that killed the old school, I was curious as to just how wonderful and revolutionary it would be when I finally tracked it down. Whilst it's difficult to judge since I wasn't there at the time to put it into context, it's probably fair to say that the visual style was pretty unique and it has a darker tone than the Chor Yuen wu xia stories it most resembles (or the kung fu comedies that dominated the box office at the time).

The visual style is quite different to the opulent soundstage based Shaw Brothers productions ... shots of butterflies and caterpillars are perhaps meant to evoke some of King Hu's atmospheric nature shots, but the dark tunnels and ragged costumes are like nothing else I can think of from that time.

The action scenes show signs of Tsui Hark's future interests - the camera is no longer content to sit back and watch the fight, but gets right in there with the fighters like it might start throwing punches itself. There's a little bit of wire-work in there too, but it's based on some rather neat gadgets using actual wires rather than mystical wu xia techniques.

Those who say that it's Tsui Hark's best work are making a difficult claim to support... sure it's a good movie, but better than Zu: Warriors Of The Magic Mountain? The Blade? Once Upon A Time In China? Peking Opera Blues? No. I suspect that its obscurity is probably the main reason people used to say this... the film was very hard to see for a long time, so having seen it added some extrinsic value to the experience. I haven't heard many people make the claim since it came out on DVD.

It's definitely worth seeing if you're a Tsui Hark fan, though an intact print without the substantial damage apparent on the DVD release would be even more worth seeing!