Directed by
Just a horror movie in the end 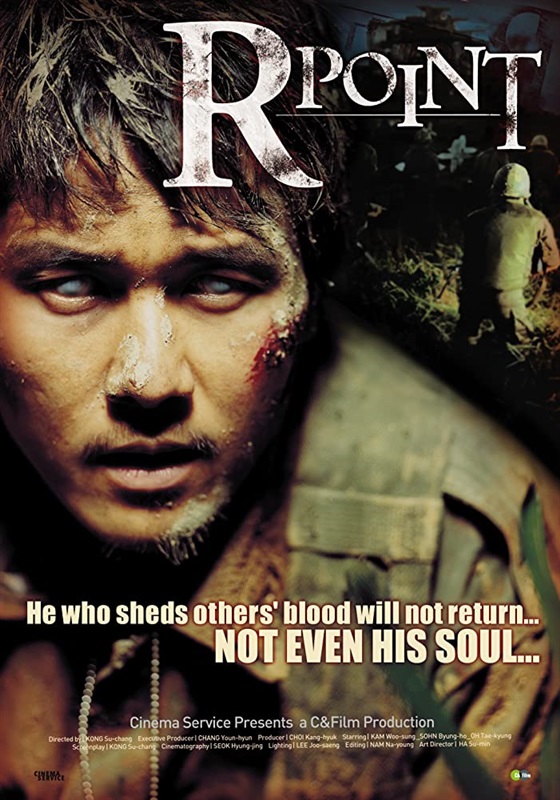 I'm not a big fan of horror movies, and I'm not a big fan of war movies... but the idea of a "horror war movie" was rather appealing. I had thought "why's nobody done that before?", but I guess Predator and Dog Soldiers sort of fit the description, though they're both about a small group of soldiers in a non-war situation. That's more or less the case with R-Point too, it turns out, so I'd say it's really a "horror movie with soldiers".

During the Vietnam war, the Korean base receives a radio transmission claiming to be from a platoon of soldiers that went missing some months ago, and were presumed dead. The transmission says "we're dying out here", which suggests that the presumption was not yet correct. Another group are sent to the area where they went missing, the titular "R-Point", with 5 days to locate the soldiers or their dog tags.

It's not long before the soldiers suss that R-Point is a bit strange, and a carved message informs them that the site is basically a mass grave where hundreds of Vietnamese were killed and buried by the Chinese many years earlier. Strange things start happening, and the soldiers begin to worry that their lives may be in danger, not from the Viet Cong, but from something altogether scarier.

Well, to cut a long story short, they're not wrong :p As observed before, I'm not really big on horror movies - I don't like to be scared, and I don't like to play along with them when they do the tired camera/audio tricks to make you jump or raise the hairs on your neck. I especially don't like horror movies that never bother trying to engage your intellect and explain why all these horrible things are happening, which seems to me to be the flaw in many of the recent Asian horror films. There's ghosts, and they have a grudge against the living, and we're just meant to accept that's the way things are. Sorry, but I need a little more than that. R-Point is one of those films that doesn't feel the need to give me it. Well, that's its right I guess.

There's definitely potential in the idea of a war film with supernatural horror elements, but R-Point in no way concerns itself with the natural horror of war, or the use of traditional horror techniques to convey or explore it. There's only one scene at the start where they're faced with a living enemy, the exact significance of which escaped me to be honest - it might tie in with the end of the film, but I'm not sure. The band of soldiers act little different from the average group of college kids in a slasher film in the face of the supernatural, despite the fact they've presumably been in equally horrific situations where their enemies were other humans. It might have been interesting if the film had played it as a straight war film until the midpoint, when the soldiers suddenly realised the enemy they were fighting had shuffled of its mortal coil... but they come to the ghost conclusion pretty much from the start.

Listening to my criticisms, it seems that it might just be that R-Point was not the film I wanted or expected it to be, and my disappointment is therefore not a fair reflection on the film itself (claiming a film is a failure when you don't even understand what it was trying to do is a review feature that always bugs me). I'm sure a horror film fan would have enjoyed it a lot more than I did, though I still don't think it's very well made even on those terms - though perhaps above average. Not being a fan of the genre, "above average" still isn't enough for me to enjoy the experience of watching a horror film though.