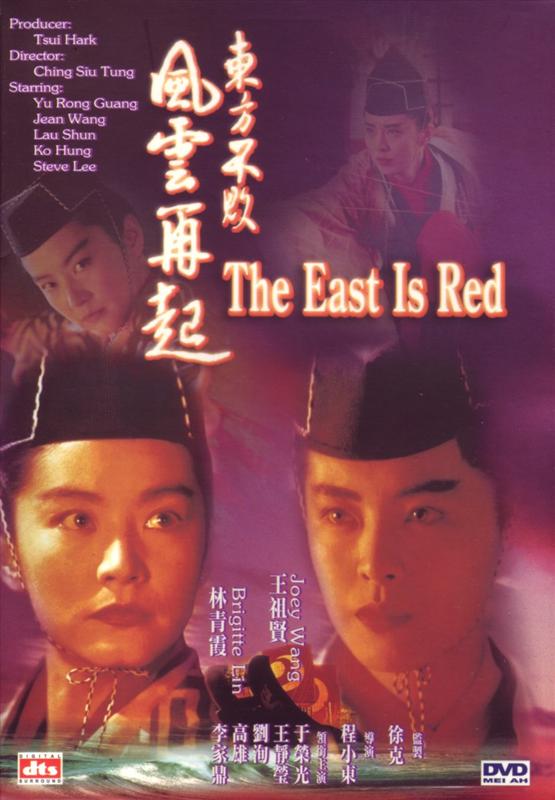 It must be very frustrating to create a character so memorable that they instantly become a part of pop culture, then start to make the inevitable sequel only to remember that you killed the character in the original film.

There are a limited number of options in these circumstances, and Tsui Hark has tried them all...

a) twin brother nobody mentioned in the first film (A Better Tomorrow)
b) somebody that looks exactly like but isn't them (A Chinese Ghost Story II and III)
c) prequel (A BETTER TOMORROW 3)
d) "oh, they're not dead really" (THE EAST IS RED)

Whilst nothing is quite as lazy as the twin brother device, the last option runs a close second. THE EAST IS RED takes things even further by promoting a minor character from SWORDSMAN II to a major role (Cici) and simply ignoring the fact that she died in the first film! Either they hoped we wouldn't notice or they actually forgot themselves. This kind of lazy plotting unfortunately represents THE EAST IS RED well. The basic idea behind the script seems to have been to have somebody say "Dung Fong Bat Baai" every 30 seconds and hope the audience keeps thinking of SWORDSMAN II so they won't notice what a lame cash-in this pseudo-sequel is.

Perhaps I'm unfair, and there is really a hidden depth and meaning to the film that's simply obscured by the lousy subtitles. I thought that I might have a revelatory moment when I watched the trilogy back to back, where it all clicked into place and made sense narratively and thematically. I didn't, and I don't think a better subtitle job would have helped.

Basically the film has Asia The Invincible not dead after all, but in hiding because (s)he has repented for her wicked ways, e.g. killing everybody she met. Yu Rong-Guang seeks her out, because he thinks she's cool or something, and tells her that there are people out there using her name to gain power and do bad things. She doesn't like this, and returns to the martial arts world to ask them nicely to stop doing it. This plan lasts about 5 minutes before she decides the best plan is to make everyone hate the name Asia The Invincible - by killing everybody again.

Joey Wang reanimates Asia's lover Cici, who's been pretending to be Asia herself in order to draw the real Asia out of hiding (and death). And there's some ninjas, who are bad. That's about as much sense as it makes, I think.

It's possible I'd appreciate the film more if I understood more of Chinese history and politics. There's definitely something political in the film, with Asia The Invincible's name being significant in some way, I'm sure, and likewise the decision to name the third film in the Swordsman series after a Chinese Communist Party anthem (note: take care if you think you've seen the soundtrack cd in a shop, because chances are it's actually a collection of Communist Party theme tunes). Maybe one day I'll understand what all of this means, but it's not high on my list of priorities and I doubt that it will make THE EAST IS RED a significantly better film.

Really, everything about TEIR feels cheap - the lucious cinematography of SWORDSMAN II is almost entirely absent, despite employing many of the same tricks and techniques. Presumably less time and care was spent setting up lighting, cameras, lenses etc to create the visual quality. Or perhaps it was just filmed on cheap cameras & film stock, making it feel more like a TV movie at times.

The film does make an effort to out-do its predecessor with the quantity & insanity of the wire-driven action scenes, but despite the truly insane things they attempt at times, none of it comes off as well as it did in SWORDSMAN II. Too many visible wires, lazily placed cameras and sloppy editing make it all too apparent that you're watching a stunt crew on a set, not witnessing supernatural levels of martial arts prowess. The main weakness in SWORDSMAN II's action was the cheap & fake looking miniatures used in a few places. Sadly, THE EAST IS RED makes even more use of miniatures, which look no less cheap and fake than they did a year earlier.

So, is it all bad in the film? Well, mostly, but it's bad mainly in comparison with other films like SWORDSMAN II and A Chinese Ghost Story. Knowing that the same bunch of people are certainly capable of producing much better films, it's much harder to accept THE EAST IS RED for not being one of them. It's still a wire-fu wuxia fantasy with Brigitte Lin, Joey Wang and Yu Rong-Guang though, looked at by itself, and there's some level of enjoyment to be had simply because of that.