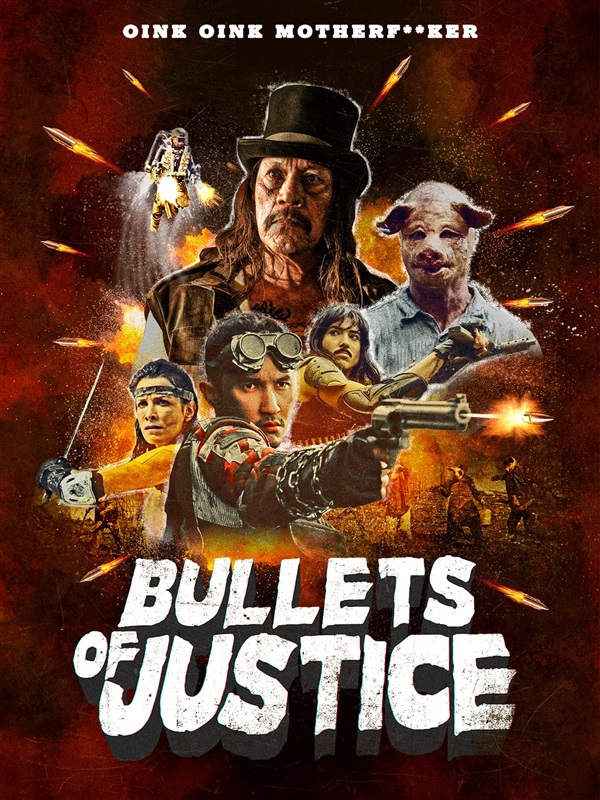 During World War 3 one side or the other tries to create super soldiers by combining human and pig DNA, resulting in an army of pig men... who unfortunately end up enslaving humanity and farming them for meat.

Rob Justice is one of the few free humans left, a bounty hunter for the resistance, who send him and his sister Raksha on a mission to locate and destroy Mother, the only female of the pig-men and mother to them all.

BULLETS OF JUSTICE is a very weird film... it's weird in ways I had never even imagined a film could be weird. It seems to be simultaneously trying to be a tongue in cheek genre film and an experimental art-house film, with both aspects in constant tension with each other.

The cliche-ridden plot, corny dialogue, hammy performances and over the top action could all have made for an entertaining "midnight movie", but rather than just lean into the silliness and make a fun genre film the director constantly cuts in surreal moments and strange artifices that are anywhere between avant-garde experimentalism and just plain ridiculous.

It's hard to tell whether there was any real method to the madness or they just threw in whatever came into their heads on any given day, with no particular regard to maintaining consistency either in terms of tone or narrative (the film seemingly jumps into an alternate timeline at one point, throwing whatever coherence it had up until then out of the window).

The film is at least consistent in its disregard for consistency though, suggesting that whilst the details may not have been meticulously planned there was probably a plan for how they would approach making the film.

BULLETS OF JUSTICE is so stubbornly strange that it's very difficult to rate... from the trailer I went in expecting a fun, over the top action film with Danny Trejo and that is definitely not what this is (apart from anything else Trejo is only in it for about one minute, despite his prominence in the film's promotional materials). It is definitely something more unique and interesting than that... but probably not more enjoyable.

The film's weirdness does produce some truly memorable moments, but it's often just weird when there's no reason for it to be weird which can detract more than it adds, making the film almost uniquely frustrating.

I doubt anybody would argue that it is a "good" film, but that obviously isn't what it's trying to be so it hardly counts as a criticism. I wouldn't say I like the film, exactly... but I'm glad to have seen it.