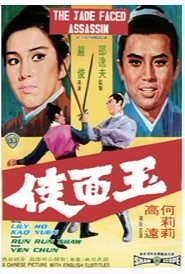 THE JADE-FACED ASSASSIN is a grand tale of generation-spanning betrayal, revenge and hidden identities - it's an enormously convoluted plot, but a very satisfying one. Lily Ho is orphaned as a baby and raised by a clan of bandits who teach her all their martial arts skills, until she turns 18 and heads off to find the man she believes was responsible for her parents' murder. The problem is, nobody seems to have heard of him!

The film is a female-centric wu xia in the 60's style, with Lily Ho playing the sort of role that Cheng Pei-Pei often found herself in. The action is clearly influenced by King Hu's classic films, and is sometimes quite impressive, other times very hokey (but quaintly so). There's some really dodgy acting in places (also quite quaint), but Lily Ho really shines here - very charismatic indeed (and of course beautiful).

The first 18 years of the film do not engender much hope to be honest, but thanks to the magic of cinema that only takes up 20 minutes of our life - leaving over 90 minutes of good times once Lily arrives on set. The film peaks when Lily meets Fan Mei-Sheng and they have some capers together - their chemistry is great... possibly because they're the only two characters who smile or laugh for the most part. Many other characters come and go throughout the course of the film, adding their part to the picture... I have to say that none of them seem to match the description of "Jade-Faced Assassin", so I still have no idea where the film gets its name from!