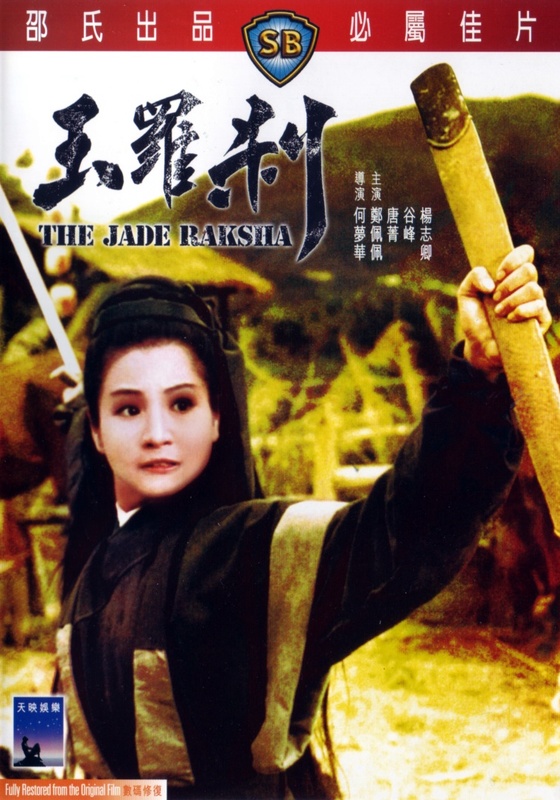 A fearsome swordswoman known as The Jade Raksha appears in the martial arts world and begins killing people whose surname is Yan. A swordsman figures out who she is, and asks her why - the answer being that a Yan killed her family 18 years ago... but she's not sure exactly which Yan it was. He suggests that killing the innocent is wrong, but she only has vengeance on her mind and is not to be convinced.

The Jade Raksha is one of those films that followed in the wake of Come Drink With Me, and is clearly influenced by it (especially in the staging of the action, and some of the cinematography). Though the basic message about cycles of revenge is simplistic, it has a rather interesting story and fascinating characters. The Jade Raksha herself is particularly fascinating, being in many ways unsympathetic - but (thanks to Cheng Pei-Pei's complete awesomeness) engendering sympathy anyway. Tang Ching's character is much easier to like without reserve, even though he seems much too old for the role. Ku Feng delivers another splendid and nuanced performance, as you knew he would!

I've never been a huge fan of Ho Meng-Hua - although he has directed some good films, I usually feel that they're good despite him rather than because of him. To some extent that's true here, though the direction is not 'bad' (it's certainly not up to King Hu's level, but then so few directors ever have been) and there are some moments that are quite inspired. Production values for the film are high for the time, with lots of outdoor filming and some beautiful and elaborate sets for the rest. Action in the film is definitely a highlight, featuring some fun choreography (though the extras needed more training in squirting their blood bags over themselves inconspicuously) and some very nice attempts to create the sort of supernatural 'wu xia' skills for the swordsmen that King Hu pioneered. There's a great bamboo-top moment that (p)recalls the scene in Crouching Tiger, Hidden Dragon.

I do have a soft spot for the 60's swordplay films, and it's especially soft when they star Cheng Pei-Pei, so factor in that when I say that for me it rates... 8/10