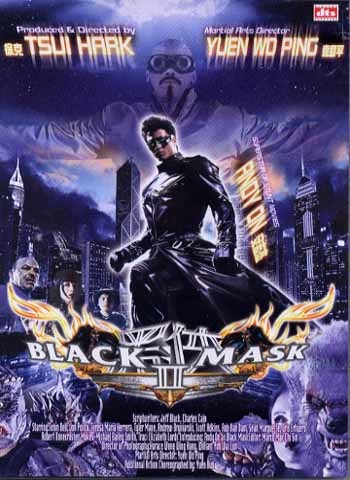 The first BLACK MASK was not a great a movie, but it was not a really bad movie either, and contained at least some excellent action courtesy of Yuen Wo-Ping and Jet Li. No Jet Li for the sequel, but Wo-Ping is back and this time Tsui Hark steps up from producer to producer & director. The movie was actually completed back in 2001, but shelved by Columbia Tristar until Christmas 2002, when they decided the world was finally ready for BLACK MASK 2.

Well they were wrong. The world will probably never be ready for BLACK MASK 2, at least so long as there is any other possible source of entertainment to be had on the planet. Tsui Hark, Tsui Hark, Tsui Hark... what have you done? Now I'm usually a sucker for the comic book CGI fests... loved The Storm Riders, loved The Avenging Fist, watched Legend Of Zu twice and even kind of enjoyed Wesley's Mysterious File... But even I cannot avoid or deny the fact that BLACK MASK 2 is utter crap!

Where to begin with the flaws? Well, the script for a start... incoherent cheese with zero wit or style that feels like it was written by 1st graders. On crack. Actually the story is credited to Tsui Hark, Julien Carbon and Laurent Courtiaud - the latter two writers also responsible for the story for recent flop The Touch. The script was adapted from the story by two more gwei los... it's a really sad fact that HK movie makers seem to feel they need to hire Western writers to make good movies now, because all experience so far has been of disaster. Perhaps the writers were forced on Tsui Hark by Sony though, who bankrolled the project. Whoever, whatever the logic, it was a bad bad plan. Amateurish, dull and frankly a bit weird (the weird is probably Tsui Hark's contribution though), the script makes BLACK MASK 2 feel like a really bad made for Sci-Fi Channel b-movie.

And then... then there's the special effects. Rubber monster suits! Fake prosthetics! TV grade make up! Lots and lots of really awful CGI! Oh god, the horror. Nowhere near the quality of LEGEND OF ZU or AVENGING FIST.

At least there's the action, which pops up now and then and occasionally kicks some ass - you can really tell the Yuen Wo-Ping shots in there, because they shine like diamonds in elephant crap. Lead actor Andy On actually has some decent moves, though the real deal martial arts is only punctuation fights that are mostly written in CGI and hit-or-miss wirework. Even ace editor Marco Mak seems to have been drunk or asleep or something, as his normally fluid editing of action scenes is well off. The one thing you can normally count on Tsui Hark to do well is shoot cool action, but here he lets us down in this respect too.

I was prepared for the worst already, having read not one positive comment about the movie... but even expecting so little I couldn't believe how bad the movie is. Tsui Hark's output has always been quite variable but usually at least varied from 'ok' to 'excellent'. Here he hits rock bottom, certainly the worst movie of his career.

What happened? How could it all have gone so horribly horribly wrong?