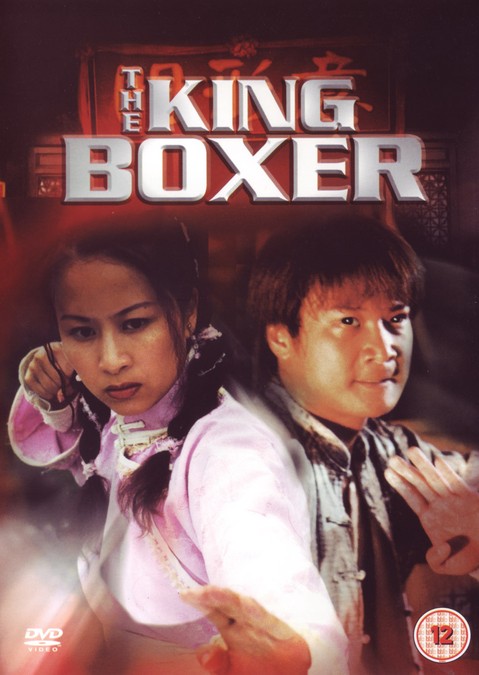 Another film (possibly the first) from Douglas Kung's My Way Film Production, that odd company who make HK films the way they used to be made 10-15 years ago, but which never actually get released in Hong Kong.

The King Boxer shares a name with two early 70's martial arts films, but shares a lot more with some later vintage films of the genre. Most obvious is Fong Sai Yuk, from which large chunks of plot are lifted, but the not-particularly-observant will recognise elements from Fist Of Legend, TAI-CHI MASTER and Sammo's The Prodigal Son. Well, original story lines aren't exactly a strong feature of the kung fu genre I guess :P

Chin Kar-Lok stars as the headstrong young (!) son of a business man who is far more interested in learning Kung Fu than business wiles, and joins the Yiyin kung fu school despite the fact their master was just defeated by their rivals and it is going to close. The main reason he joins them is because he fancies one of the master's daughters (May Kwong), and due to a misunderstanding (that he can actually fight) the family place their hopes on him to rescue their school.

The style is very reminiscent of early 90's kung fu comedy on a fairly low budget. If it had come out in 1993 it would have been lucky to rate a 5/10, but this sort of film has been tragically missing from screens for a long time, and even a mediocre entry is worth some attention. I could have done without a lot of the comedy, which only occasionally manages to be amusing. I could have done without the various romantic angles too, as they're entirely lacking in substance or emotion. What I couldn't have done without is the fight scenes, which are quite refreshing. Not classic work, but offers at least glimpses of the kind of choreography and genuine physical talent that made HK cinema a world-wide phenomenon. We even get another fine villainous performance from Billy Chow, for the true early 90's vibe.

If you've still got any early 90's kf films to get through, probably go with those first, but if you've already seen all that's available and have been itching for something new, by all means do pick up THE KING BOXER. It ain't great, but it doesn't have a lot of competition these days and it could have been worse :)