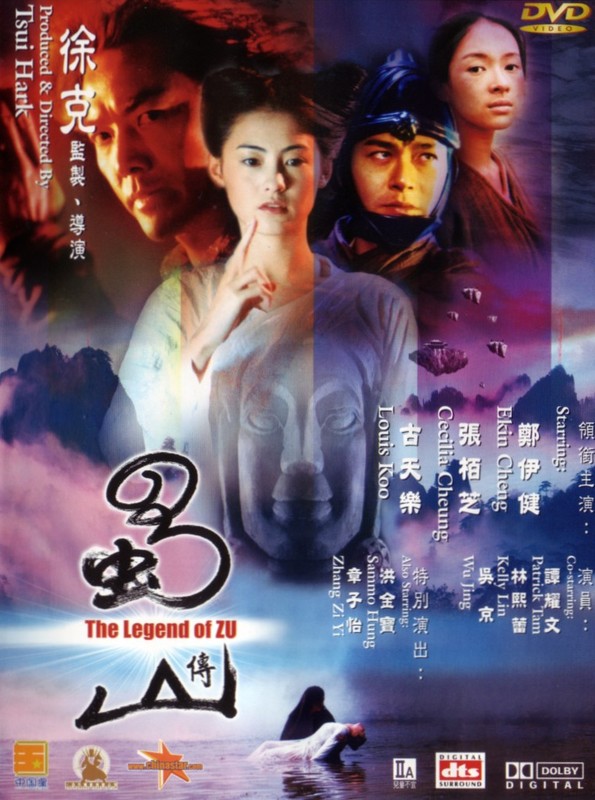 Whoosh, swirl, bam! Repeat. Tsui Hark is well known for the pace of his movies... he often tends to throw spectacle at the viewer pretty much without pause for rest, and LEGEND OF ZU is perhaps the apex of this. There's barely moment when some immortal isn't swishing their weapons or themselves about the screen, or shouting some vaguely incomprehensible but important sounding phrases out. A real audiovisual spectacle... this is a movie that really needs to be watched on a big scale home theatre setup to be appreciated (or in a theatre I guess!)... the visual and sound effects are all quite mindblowing.

But... that's basically all there is to the film. I sat throughout the 2 hour length quite fascinated and certainly impressed, but was aware that I wasn't exactly "enjoying" it. I didn't crack a smile once, or feel any other emotion really.

What the movie is missing is the human element... in the original Zu: Warriors Of The Magic Mountain we had Yuen Biao as the naive innocent dropped into a world of immortals with powers and issues that were quite beyond his experience and understanding. We followed his confusion, amazement and growth. In LOZ, the intermediary equivalent of Yuen Biao is skipped, and the viewer is dropped directly in amongst the world of the immortals. The trouble with this is that we don't really understand, and hence don't really care, about their issues.

I don't think it would have mattered to me at all whether the Zu Mountain warriors or Insomnia had won their battle. It looks as if maybe Zhang Ziyi was meant to play the human role, but evidently they could only afford about 10 minutes of her screen time, so her appearance seems rather contrived and unrelated to the rest of the movie.

But anyway, there's some fantastic special effects and lots of appropriately epic sounding things being shouted out, and it certainly flys by. Just don't judge it as a 'movie' (because it's a bad one)... consider it a sensory experience!

aka ZU WARRIORS in the US (different cut?)