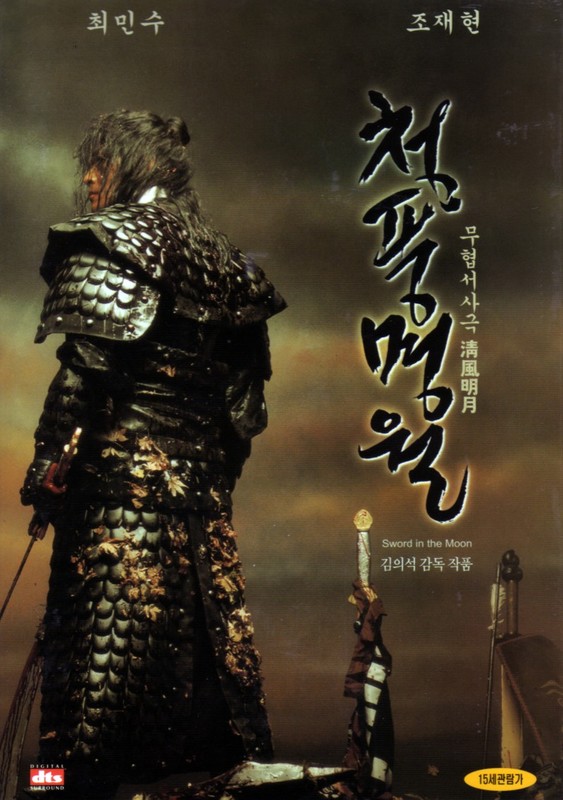 Well, SWORD IN THE MOON finally got a DVD release in Korea, and despite the mostly negative responses I've heard to it, and the suspiciously tardy DVD release, I couldn't help but pick it up - any wu xia film is better than most non-wu xia films in my eyes :D Perhaps low expectations were an advantage, because I was quite pleasantly surprised to find the film pretty enjoyable.

An assassin is killing a number of ministers who were involved in a revolution that usurped the throne, and the government's top swordsman is tasked with identifying the culprit. This doesn't take particularly long, but the answer is not one he wanted to hear. Through prolonged flashbacks we learn why, and the history of the swordsman and the assassin, and of the revolution.

The film is typically melodramatic for a Korean film, and resolutely serious in tone - no HK style comedy moments to be found here. The story can be a little difficult to follow at first, but all makes sense eventually. The film goes a bit wobbly at the end, but no worse than a Chang Cheh film might do, and for the most part I found it enjoyable. The production values are high, with some good cinematography to capture it. The fight scenes aren't up to the calibre of the better HK wu xia films, but perhaps they're not meant to be - the fights are more "realistic", in that they're less like choreographed dance routines, but there's some wirework and occasional cgi that put the film in "wu xia" mode. The film doesn't have the best cast, unfortunately, with the leads being a tad lacking in charm and occasionally difficult to distinguish from each other. There's a young lady in the film that I don't think I've seen before, but makes the best impression of any of the principle cast - not just because you see her nekkid... or perhaps it is :p The film lacks the charm and grace of the better HK wu xia films, and perhaps the beauty too, but I only wish HK would make them half this good anymore - TWINS EFFECT 2 does not give me hope that *that's* about to happen any time soon, though Tsui Hark surely still has it in him if he can get the funding and cast. SWORD IN THE MOON is not going to go onto my list of favourite wu xia by any means, but it's a whole heap better than Romantic Warriors or Legend Of The Evil Lake - perhaps better than Bichunmoo too, though I did like that film quite a bit more on a second viewing. Obviously it's nowhere near the wonderful Musa, but it's a different affair altogether really. SITM will probably get a second viewing within three years, which is perhaps the best indicator of how much I liked it* :)

* OK, 9 years later it still hasn't had its second viewing, so maybe not as much as I thought!