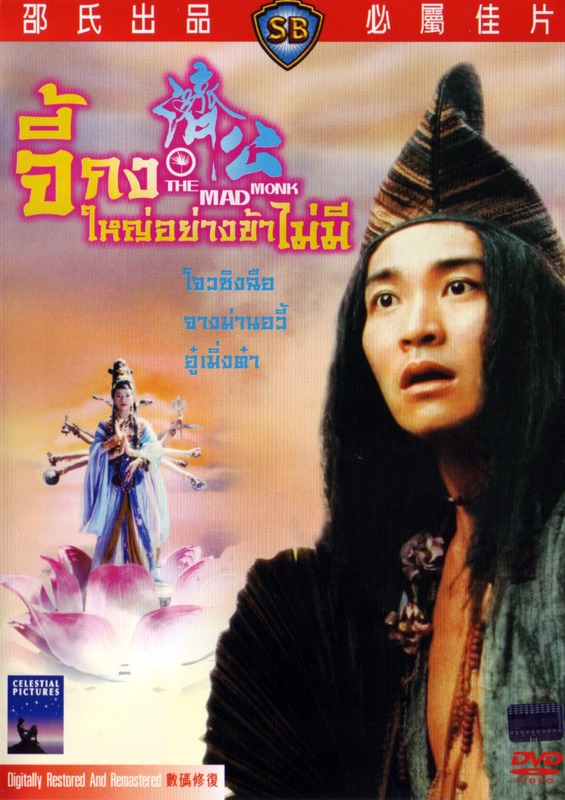 THE MAD MONK (1993) has been one of my "holy grail" films for ages, due to the inavailability of a dvd release with Cantonese audio (I tried watching in Mandarin and it hurt the film badly, so I'm glad I waited). Finally a decent release has surfaced as part of the Celestial pictures Shaw Brothers library (nicely restored and remastered, with original mono and a pretty good subtitle translation... and the all important Cantonese audio track). I think the film's reputation has suffered unfairly from the number of people that have only seen it in Mandarin, as it's a pretty good Chiau film, though not one of his best.

The plot is... complicated! Chiau plays a heavenly "fairy" (love the misuse of that word in HK subtitles :p) who annoys the other celestial beings by meddling with their plans for humanity. It turns out Chiau feels human beings get a rough deal from the gods, who should learn to be more compassionate. He suggests they should try living amongst the humans to get a better feel for them, and (didn't quite follow this) ends up being sent down to earth to try and redeem the lives of a beggar, a prostitute and a villain by proving they can become "decent folk".

The story quickly becomes complicated, with references to Buddhist philosophy and mythology that the subtitles can hardly be hoped to adequately explain to a gwei lo like me, and not particularly helped by the mo-lei-tau comedy that is mixed in haphazardly with more serious material. Events fly by with little exposition, and I can only imagine that the audience was expected to be more familiar with the character and story than this viewer was.

Production values are surprisingly low for a film with such a star cast and crew, with some really obviously visible makeup and inexcusably visible wires. The sets for heaven are exceedingly artificial, but I imagine this was at least partially deliberate. The action in the film largely consists of Ching Siu-Tung's trademark flying, twirling and wholesale destruction of scenery... it's not amongst his best work.

I guess those would count as flaws, so why do I say it's "pretty good"? Well, because it features Stephen Chiau doing what he does best - being himself! Some of the supporting cast offer worthy moments, particularly Anthony Wong, but it's Chiau that carries the film. There was apparently quite a bit of conflict between Chiau and director Johnnie To on set, and that may explain the inconsistent tone and style - there are bits that are definitely Chiau moments and others that are definitely not. Apparently To's self-confidence was hurt by the experience, and he considered quitting as a director... I'm glad he didn't, given some of the fantastic work he has produced since, but it does seem that this particular job was not right for him.

It would have been very interesting to see what Tsui Hark made of the film, since re-imaging traditional stories and genres was his forte, and he was at his peak around the time this was made. I can't imagine him and Chiau working together though... if he was butting heads with Johnnie To, he would probably have killed or been killed by Tsui Hark!

Another virtue of the film is Maggie Cheung, who may not be acting to the best of her ability but certainly looks lovely here :) Anita Mui's small amount of screen time as the Goddess Of Mercy herself is also a plus.

Overall, I'd say there's more that's right with the film than wrong, though it is definitely a lesser Chiau film and certainly not one to use as an introduction to the man or to HK cinema. For the afficionados out there, it's definitely worth seeing - now that there's a dvd release that does it justice.