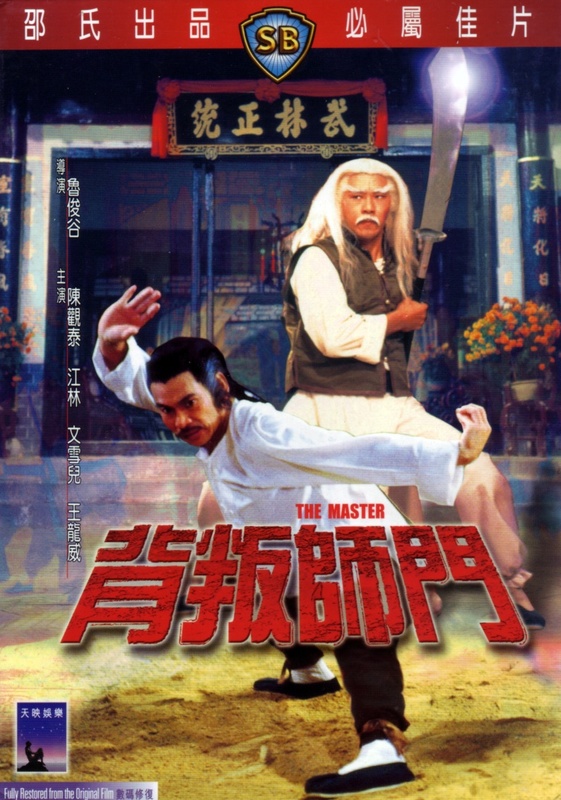 THE MASTER (aka THREE EVIL MASTERS) is a clear attempt by Shaw Brothers to cash in on the success of Jackie Chan and Sammo Hung's kung fu comedies, by casting fellow Little Fortune Yuen Tak in a role very similar to Jackie's stock undisciplined young kid who needs to learn kung fu to avenge his master.

I've often wondered why he haven't seen more of Yuen Tak in front of the cameras, as he's an excellent martial artist and acrobat - quite the equal of Jackie Chan and Yuen Biao. For some reason he's had even less of a screen presence than Yuen Wah, who at least gets meaty villain roles. THE MASTER is the only film I'm aware of that has Yuen Tak in the lead role - I guess it must have flopped?

To be fair, Yuen Tak doesn't have the natural charisma of Jackie or Sammo, who have both made a career out of making you love characters who are as often as not quite dim and small minded until their inner heroism is drawn out. Yuen Tak's character in THE MASTER is along these lines, but in his hands the character is quite genuinely annoying when he's being a dick. He's not helped by the fact the comedy in the film mostly falls flat - it's the familiar goofy slapstick that made Jackie a star, just not done very well. This isn't really Yuen Tak's fault - he gives it his best... comedy just isn't script writer Ni Kuang's strong point, and the other comedic characters (Chan Lau and Lam Fai-Wong?) are REALLY annoying - even more annoying than Dean Shek! Yuen Tak's dreadful hair in the film doesn't really help matters either.

So, err, that's the bad, which is not insignificant, but is thankfully balanced by some big good. First big good is Chen Kuan-Tai, always a pleasure to see and one of Shaw Brothers' finest martial artists and actors. I guess he is THE MASTER of the title, though his screen time is fairly small. The film opens with a fight scene between him and the THREE EVIL MASTERS that gave the film it's American title, and it's really a doozy - beautifully choreographed by Hsu Hsia and wonderfully executed by the performers. Chen Kuan-Tai's real skills as a martial artist have never been better displayed, to my knowledge.

And that's the second big good - the film is full of excellent fight scenes! This is where Yuen Tak shines - his pedigree as one of the 7 Little Fortunes and his many years of Peking Opera training is obvious - really acrobatic and powerful. The choreography shows how much the art had moved on in the late 70's, being fluid and dynamic, and truly awe inspiring to watch.

So, whilst the film isn't a classic in the same league as The Young Master, for instance, it's still a must-see for fans of martial arts. The late 70's and early 80's were probably the heyday for kung fu films, and we're never likely to see fights of this calibre again unless my experiment to clone Bruce Lee from a strand of his pubic hair I found comes to fruition :)