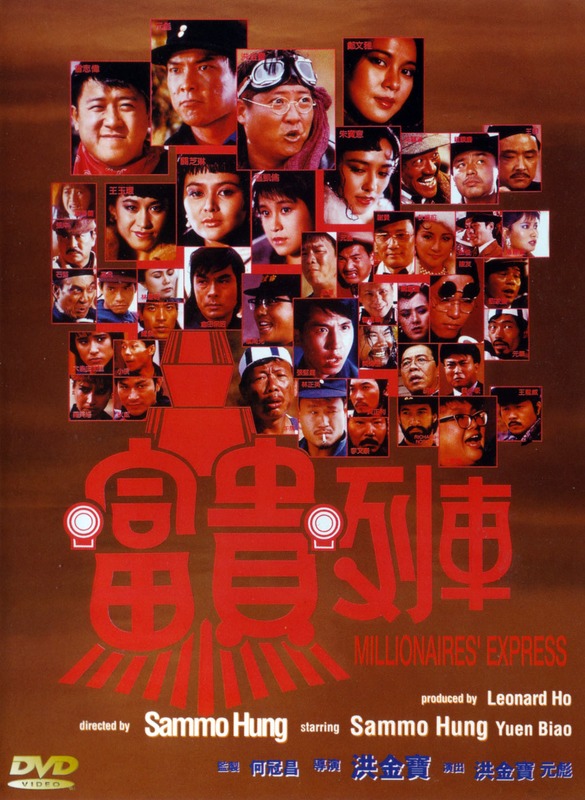 The plot: the inaugural voyage of a luxury train draws the attention of several gangs of thieves, and a backwater village that the train passes through becomes the centre of attention as prodigal son Sammo Hung plots to have it stop there and relieve the passengers of some of their wealth.

OR is it: Sammo Hung produces a thinly veiled excuse to get nearly everyone he knows into his Chinese New Year's movie for 1986?

Really the plot isn't all that important, or even coherent, as it's mainly a film of action & comedy set-pieces - featuring one of the largest casts of HK celebrities ever put on film.

Sammo Hung directs & leads the cast, with Yuen Biao taking second billing and about 100 others padding out the ensemble cast. There are multiple subplots that criss-cross like spaghetti, with the majority never really reaching any particular fruition or conclusion if you analyse events too deeply. Most of the characters are just there to have their moment of comedy or action, with Sammo Hung's story arc being the only one that has any real depth. It all kind of works, but you have to remember that it's a Chinese New Year film and not one that was intended as a profound work of art.

Glancing at the cast list, the estute viewer will note that at least half the cast were best known for their martial arts. Not everyone gets to show off their talents - e.g. Yuen Wah and Lam Ching-Ying just play comically pathetic bumbling idiots. Others do get chance to strut their stuff though - especially Sammo, Yuen Biao, Hwang Jang-Lee and Cynthia Rothrock. Yukari Oshima makes a fantastic impression in her first "big" role.

Personally I'd have sacrificed some of the comedy subplots in favour of more action, but action takes longer to film and they had to wrap for a NY release. The action that is in the film is superlative - Biao in particular is on top form, and there's some alarming stunt work involving multi-storey falls. It's not quite an "action classic" in my eyes because the action isn't quite front-of-stage enough, but it's definitely one that fans of 80's HK Cinema will want to see.