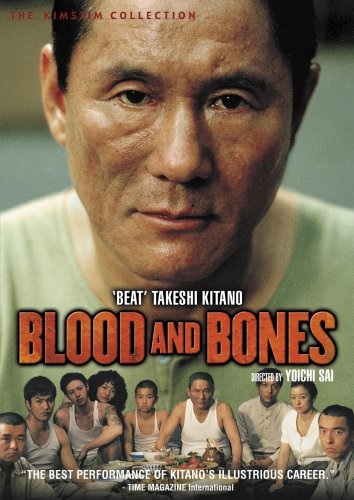 The narrator tells us the story of his father, a Korean who emigrates to Japan as a young man in the 1930's-ish. There, he turns out to be quite the bastard - selfish, violent, abusive and miserly. He gets married and has a few kids, then runs off with another woman and all the while inflicts suffering on everyone around him. Until he dies.

Why is he such a bastard? We are never offered an explanation... too many X chromosomes? (or Y, whatever). Is he going to learn, change or grow? Nope. Is his son going to rise up against him and break free from his bad dad? Not really. Will he learn to love his dad despite his flaws, because a rotten father is still a father? Doesn't appear to.

The film is quite compelling for most of the first 90 minutes, in a cheerless sort of way, but there's still most of an hour left by then... and the film doesn't really go anywhere. The years pass by and people only become more passive in their misery until age, disease or their own hand puts an end to it. Nobody seems to learn anything, nothing is accomplished and there's no obvious lesson about life to be gleaned from the 2.5 hours of glacially paced misery. What is the point? No idea.

Perhaps it's just to see Takeshi Kitano at various stages of advancing age, under the hands of the makeup team. Moderately interesting, but the makeup only sometimes looks convincing... and different members of the cast seem to age at inconsistent rates (in sudden bursts, usually).

There could have been a good film here, and the first half pretty much is... but it fritters away the good will it had earned in the remaining time and definitely runs longer than it should, leaving a broadly negative impression when the credits roll.