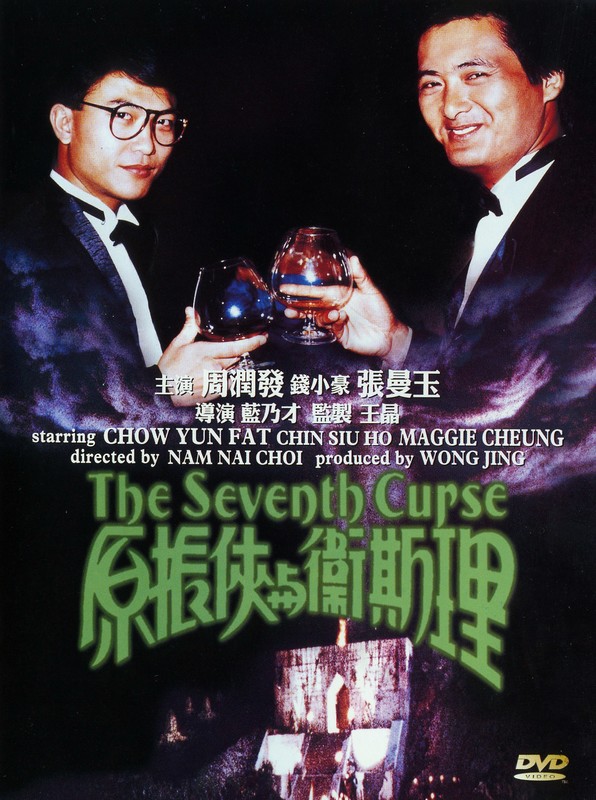 Dr Yuen Chan-hap is cursed by an evil sorcerer when he saves a girl from becoming a human sacrifice, whilst on a trip to Thailand. She gives him an unusual medicine but 12 months later the curse returns, and he must go back to Thailand to save both himself and the girl. Spoilt rich kid Maggie Cheung tags along, earning her keep by bringing loads of guns.

THE SEVENTH CURSE is based on one of the "Wisely" stories from unfeasibly prolific writer I Kuang. It's an Indiana Jones style adventure with extra blood, guts and nudity. It's a classic example of Hong Kong's "anything goes" approach to film making and Lam Nai-Choi's enthusiastic embrace of special effects, with some cool practical effects and puppetry. It looks dated of course, but practical effects age so much better than digital.

The film breaks out into action periodically, which is probably why Chin Siu-Ho is the lead rather than Chow Yun-Fat - despite playing the most famous character in the film he's hardly in it, but he also earns his keep when he does drop in. It's one of the only films I can think of where Dick Wei plays a good guy, and it's a welcome change to see him reach the end of a film in one piece. He and Chin Siu-Ho make a good ass-kicking team.

Elvis Tsui seems quite at home as the evil sorcerer - I'm not sure if the rather camp voice he's been dubbed with is his own or not, but it fits the character better than it seems like it ought to. Chui Sau-Lai evidently decided to go for broke in what appears to be her debut role, baring everything - tastefully. It's a shame her subsequent career seems to have been rather short.

The film has a smattering of comedy, largely derived from Maggie Cheung's infuriating cuteness and entertaining cameos by Wong Jing and Chor Yuen. It's one of those masala films whose diverse ingredients blend together quite smoothly, the tone doesn't pull the kind of high-G manoeuvres it can do in some films of the era, even if it is constantly shifting.

THE SEVENTH CURSE is one of those films that people have long whispered about in a kind of "if you know, you know" way - a "cult classic" I suppose, or at the very least a "fan favourite". It's trashy but made with care and attention to detail, so it's the good kind of trash - the kind you'd be very reluctant to take out.